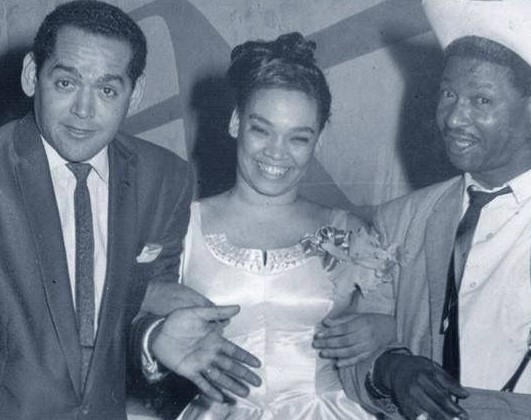 Guadalupe Victoria Yolí Raymond, known popularly as “La Lupe,” was a Cuban and Cuban American singer and dancer.  She was born in San Pedrito, a locality within Santiago de Cuba, Oriente Province, Cuba on December 23, 1936.

Yolí grew up in an impoverished family.  Her parents divorced when she was nine, and thereafter she lived with her father and stepmother.  In 1955, her family moved to Havana, where she won a radio contest as a teenager.

She began singing in Havana during the 1950s, achieving popularity by 1957.  In 1958, she finished a teaching degree and began teaching in Havana.  In the same year she married Eulogio Reyes and they formed a musical trio, Los Tropicuba.  In 1960, she divorced Reyes and began her solo career.  She was successful enough to eventually buy her own club in Havana.

Yolí, however, ran afoul of the Cuban Revolution.  In 1961, she was summoned to a radio station and ordered to leave the nation.  Her style of performing, deemed “Lupismo,” was now considered unacceptable.  Her performance style has been described in terms of both a liberated sexuality and of religious possession, specifically pertaining to Santería.

Yolí traveled first to Mexico in January 1962, then Miami, Florida, and finally settled in New York City, New York by the end of that year.  While living in New York City, she performed and recorded with Afro-Cuban percussionist Mongo Santamaria and later with Tito Puente.  By 1965, she had earned great success and married William García.  During the mid-to-late 1960s, she toured the United States, Venezuela, Mexico, Puerto Rico, Panama, and Spain.  She performed at Carnegie Hall and on several TV shows, including those hosted by Dick Cavett, Merv Griffin, Ed Sullivan, and Johnny Carson (The Tonight Show).

Tito Puente ended his working relationship with her in 1968.  During the mid-1970s, she moved to Puerto Rico, where because of her performance style she was banned from television.  She later returned to New York City, where she attended Lehman College, part of the City University of New York.  After suffering from a bout of paralysis during 1984, she recovered with the support of an evangelical preacher.  Then she became an ordained minister at Iglesia Pentecostal el Fin SE Acerca in the South Bronx.