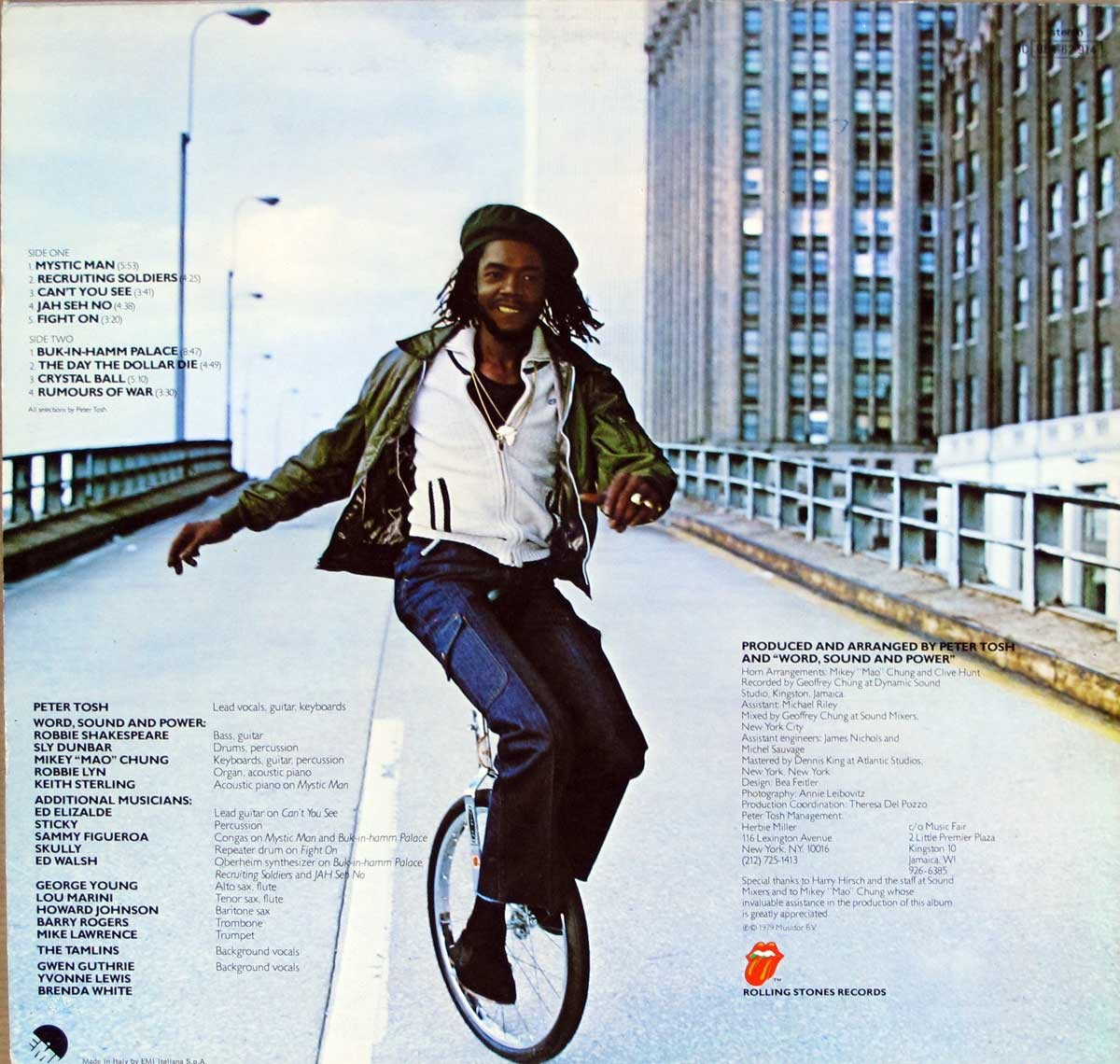 Reggae composer/vocalist, activist Peter Tosh was born Winston Hubert McIntosh (named after British Prime Minister Winston Churchill) on October 19, 1944, in Westmoreland, the westernmost parish of Jamaica, to James McIntosh and Alvera Coke. He was abandoned by both parents and reared by an aunt in Grange Hill. However, in 1960, 16-year-old Tosh independently moved to Kingston’s Trench Town community and began selling sugarcane juice. Already entrenched in the local Christian church, where he sang in the choir, Tosh had learned to play the organ and mastered the guitar. He also acquired an early appreciation of R&B and doo-wop by listening to the radio stations transmitted to the Caribbean from the United States.

In 1963, Tosh, Bob Marley, and Bunny Wailer were founding members of the Wailers’ band in Kingston. Tosh was the only one in the group who could play musical instruments, and he taught the Wailers how to play instruments and the rudiments of music. This group took their Caribbean-based music into a nouveau syncopated rock steady musical beat influenced by social consciousness and Rastafarism. Many music critics described their sound as the beginning of reggae.

In 1976, Tosh emerged as a soloist and political figure for Jamaica when he released his debut self-produced studio album Legalize It! which called for the legalization of cannabis. The album was banned from a radio broadcast in Jamaica. It peaked at no. 199 however on the U.S. Billboard 200 chart and remain there for 2 weeks. It also sold more than a million copies and was hailed as Tosh’s best album. This album included “Igziabeher,” “Ketchy Shuby,” “Legalize It,” “No Sympathy,” “Till Your Well Runs Dry,” and “What’cha Gonna Do.” Tosh also founded the Reggae Band, Word, Sound, and Power, that same year. Now considered a Human Rights activist for black dignity and racial pride, Tosh in 1977, released his second solo album, Equal Rights.

In 1978, Tosh’s album Bush Doctor peaked at no. 104 on Billboard 200 and remained charted for 20 weeks. The following year, 1979, Mystic Man reached no. 123 and stayed there for 10 weeks, while in 1981, Wanted Dread and Alive reached no.91 and remained charted for 13 weeks. Tosh released Mama Africa in 1983. It made it to no.59 and remained steady for 17 weeks. In 1984 his Captured Lives peaked at no.152 and was charted for 8 weeks. At the 27th Annual Grammy Awards in 1984, the album was nominated for the “Best Reggae Recording.” Tosh also performed at Kingston’s National Heroes Arena at the Rockers Magazine Music Awards Show in 1984. At the 30th Annual Grammy Awards in 1987, Tosh won for “Best Reggae Recording of “No Nuclear War.”

Peter Tosh, a devotee of Rastafarism and the father of ten children, died on September 11, 1987, at the University of the West Indies Hospital Kingston after being shot by three gunmen who entered his home. He was 42.

In 2012, Peter Tosh was posthumously awarded the Jamaican Order of Merit as a gifted and talented musician, performer, critical thinker, and native son.