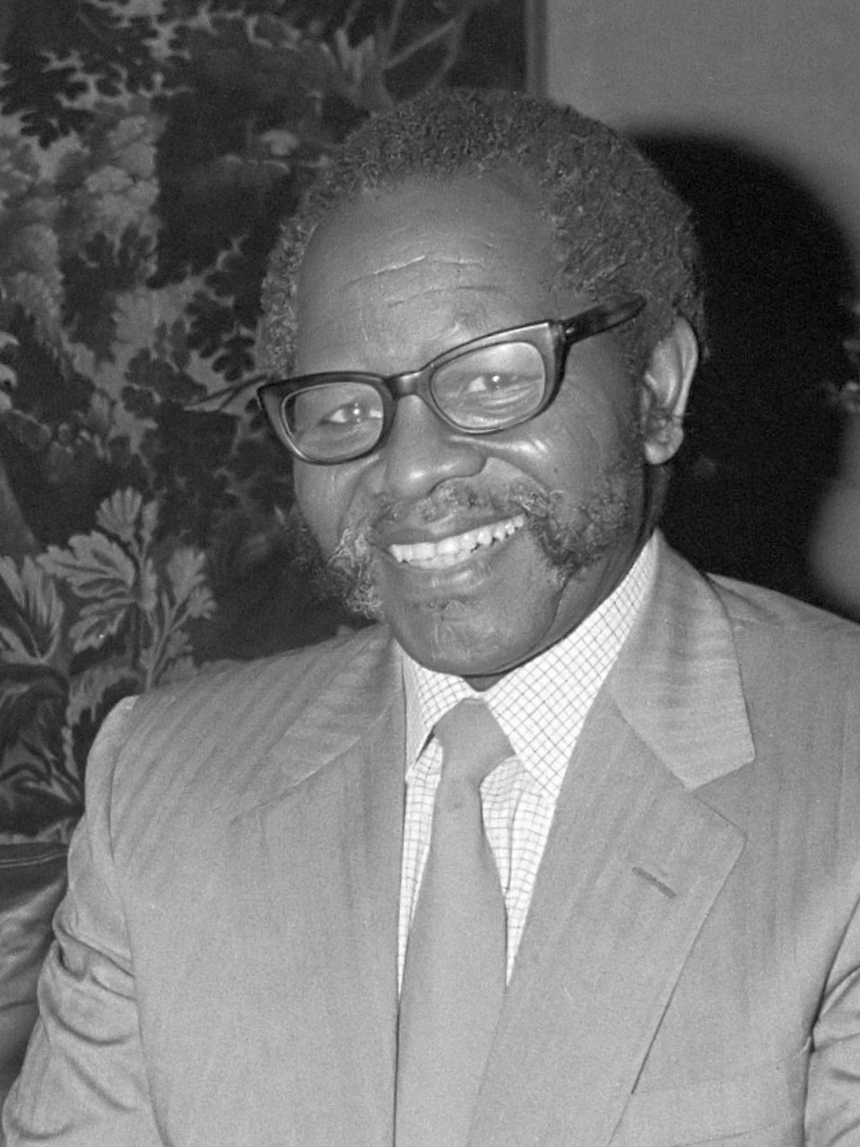 Anti-Apartheid activist Oliver Reginald Tambo was born on October 27, 1917, in Bizana, a Transkei village in Eastern Cape, South Africa. Like most in his family and community, Tambo began herding cattle at age three. He was introduced to Christianity by his parents, Julia and Mzimeni Tambo; his faith would later become a significant source of hope during his lifelong struggle for justice.

Tambo’s top marks in secondary school at St. Peter’s College in Johannesburg earned him a scholarship to Fort Hare University in Alice, where he studied mathematics and science. He graduated in 1941 and, in January of 1943, returned to St. Peter’s College in Johannesburg to teach mathematics and science. Desmond Tutu was among his many students there.

In 1944, at age 27, Tambo co-founded the African National Congress Youth League with Nelson Mandela. Their goal was motivated by a vision of ending apartheid and disenfranchisement for Black South Africans and others of mixed ancestry. In 1948, Oliver met Adelaide Tshukudu at an ANC Youth League meeting, where she was inspired by a speech he gave. The two later married, had three children, and fought apartheid together.

In 1952 Tambo and Mandela established South Africa’s first Black law firm. Well known for representing the poor and victims of apartheid laws, sometimes pro bono, they were quickly recognized by the nation’s leading activists. In 1952, Tambo participated in the Campaign of Defiance of Unjust Laws and was arrested along with numerous others, for intentionally breaking apartheid laws.

As a former teacher, Tambo was especially passionate about ending the Bantu Education Act of 1953, an explicitly racist law that confined Black children to state-run schools that taught a second-class curriculum that ensured their future failure. In many ways, it mirrored the United States’ own separate and unequal education system.

Days before his wedding in December 1956, Oliver and over 150 others were charged with high treason. During the Treason Trials, all defendants were acquitted and Adelaide and Oliver were married. Oliver became the deputy president of the ANC in 1958. Two years later, the government banned the ANC after the Sharpeville Massacre in Vereeniging. The ANC instructed Tambo and his wife to leave the country and operate elsewhere. During what would become a 30-year exile, the family mostly lived in Lusaka, Zambia, and London, England.

In exile, Tambo operated the ANC underground while Mandela and other ANC leaders suffered on Robben Island. After the existing ANC president died, Tambo assumed the role of acting president in 1969. His international lobbying skills proved critical for promoting the anti-apartheid cause and anti-racism worldwide. Tambo strongly influenced the United States Congress’ decision to pass the Anti-Apartheid Act in 1987.

Tambo and his family returned to South Africa on December 13, 1990, after President F.W. de Klerk unbanned the ANC in February of 1990. Due to health complications from a previous stroke, Tambo yielded the ANC presidency to Mandela in 1991 and became the national chairman of the ANC. Tambo is the longest-serving president of the ANC to date. Mandela’s election in 1994 is largely attributed to his efforts.

Oliver Tambo died on April 24, 1993, in Johannesburg at 75 years old. In 2005, the largest airport in Africa, located in Johannesburg, was renamed the O.R. Tambo International Airport in his honor.