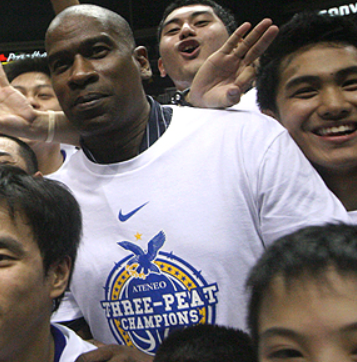 Norman A. Black is one of the most prominent coaches in the history of professional sports in the Philippines. Born in Baltimore, Maryland on November 12, 1957, Black was the son of a public school teacher. He graduated from the Catholic Cardinal Gibbons School in Baltimore and received a bachelor’s degree in English at St. Joseph’s University in Philadelphia, Pennsylvania. At 6 feet 5 inches tall, he became a star on the basketball team as well as a team captain and was named the most valuable player. Between 1979 and 1981, Black played in the Continental Basketball League’s Lancaster Red Roses and Philadelphia Kings and spent a season with the Detroit Pistons of the National Basketball Association (NBA). He continued his professional basketball career when he decided to work abroad in the Philippines Basketball Association (PBA) and signed up with the Tefilin Polyesters (aka Tefilin Fibermakers).

As a valuable American “import” (a quota of foreign players, most of whom are black), Black spent a year with the Polyesters, three years with the San Miguel Beermen, and briefly with teams called the Magnolia Quench Plus, Great Taste, and Alaska. Nicknamed “Mr. 100%,” he scored 76 points in a game for Magnolia. In 1985, he started his first coaching assignment with the Beermen, the most successful Filipino pro-basketball franchise. After ten years with the team, he won a record of nine conference and tournament championships. From 1997 to 2002, he coached three teams: the Mobiline Phone Pals, the Pop Cola 800s, and the Sta. Lucia Realtors, who won its first championship.

In 2005, he turned to college athletics by coaching the Blue Eagles at Ateneo de Manila University, the second most prestigious university in the country. Thanks largely to his skills in devising a highly effective recruiting network, he clinched several collegiate championships, including five straight UAAP (University Athletic Association of the Philippines) crowns from 2005 to 2012. Black returned to pro-basketball in 2012, coaching the Talk ‘N Text Tropang Texters who won the All-Filipino title. Since 2014, he has coached the Meralco Bolts, a team that has not won a championship but made it to two finals.

As a PBA import basketball player, Black continues to remain the all-time record holder for the number of rebounds and scoring points. Black also won a gold and two silver medals coaching Filipino national teams at the Southeast Asian Games and the FIBA (The International Basketball Federation) Asian Championship.

Fluent in Tagalog and respected for his community involvement, he and his wife, Benjie Davila, a Filipina, and son, Aaron, who plays for the Ateneo basketball team, live together in the Philippines.