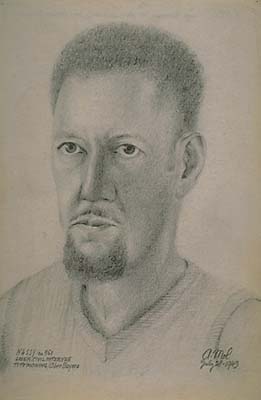 Josef Nassy was an Afro-Jewish artist and Holocaust survivor.  Born on January 19, 1904 in Paramaribo, Surinam (Dutch Guiana), he was one of seven children born to Adolf Philipus Nassy, a prosperous Jewish businessman who was elected to the Surinam Parliament, and Elisabeth Carolina Natalia Nassy (born de Maesschalk), a Surinamese woman of African descent. As a child, he received private art lessons. In 1919, he relocated with his father to Brooklyn, New York and graduated from high school there.  He then enrolled at Pratt Institute in Brooklyn, New York and earned his degree in electrical engineering.

In 1928, a subsidiary of the Warner Brothers movie company hired Nassy to install sound systems in theaters across Europe.  However, he first had to prove that he was a U.S. citizen.  He pretended he was born in San Francisco, California in 1899, prior to the catastrophic earthquake that destroyed vital records. While attending the Royal Academy of Fine Arts in Brussels (l’Académie royale des Beaux-arts de Bruxelles), Nassy neglected to indicate a religious affiliation on his residency application filed with the police. These two things—the fraud and the omission—potentially spared him from torture and death when the Nazis invaded Belgium in 1940.

Nonetheless, in April 1942, Nassy was rounded up with nearly 2,000 other Americans living in Belgium and the Netherlands and placed into a series of concentration camps. From the Beverloo Camp in Belgium, the Nazis transferred him to the Laufen Camp and Tittmoning Subcamp in Germany (Upper Bavaria) where 500 foreign nationals were held. This camp had a dozen individuals of African descent and 30 Jewish prisoners. He and fellow internees were treated better than other captives due to the possibility of exchanging them for German captives held by the Allies.

The Red Cross and the International YMCA provided Nassy with requested art supplies to relieve the mundane routine of camp life. His stark, drab renderings of the camps and those forced to live there survive as a visual journal of a long, dismal existence. His more than 200 paintings and drawings featured barbed wire fences, guard towers, steel bars, walls, gates, and shuffling, joyless men. The camp commander approved of his artistic production and art lessons which allowed him to avoid forced labor.

Liberated by the U.S. Army on May 5, 1945, Nassy reunited with his Belgian wife, Rosine van Aerschot, and restarted his career in Belgium as a portrait artist. Although best known for his portrayals of camp life, he also painted scenes of family interaction, some featuring black subjects.

Josef Nassy died of cancer in Brussels sometime in 1976. In 1984, Severin Wunderman, a California businessman and philanthropist, bought his collected artworks. In 1992, Wunderman donated the collection to the U.S. Holocaust Memorial Museum in Washington D.C.