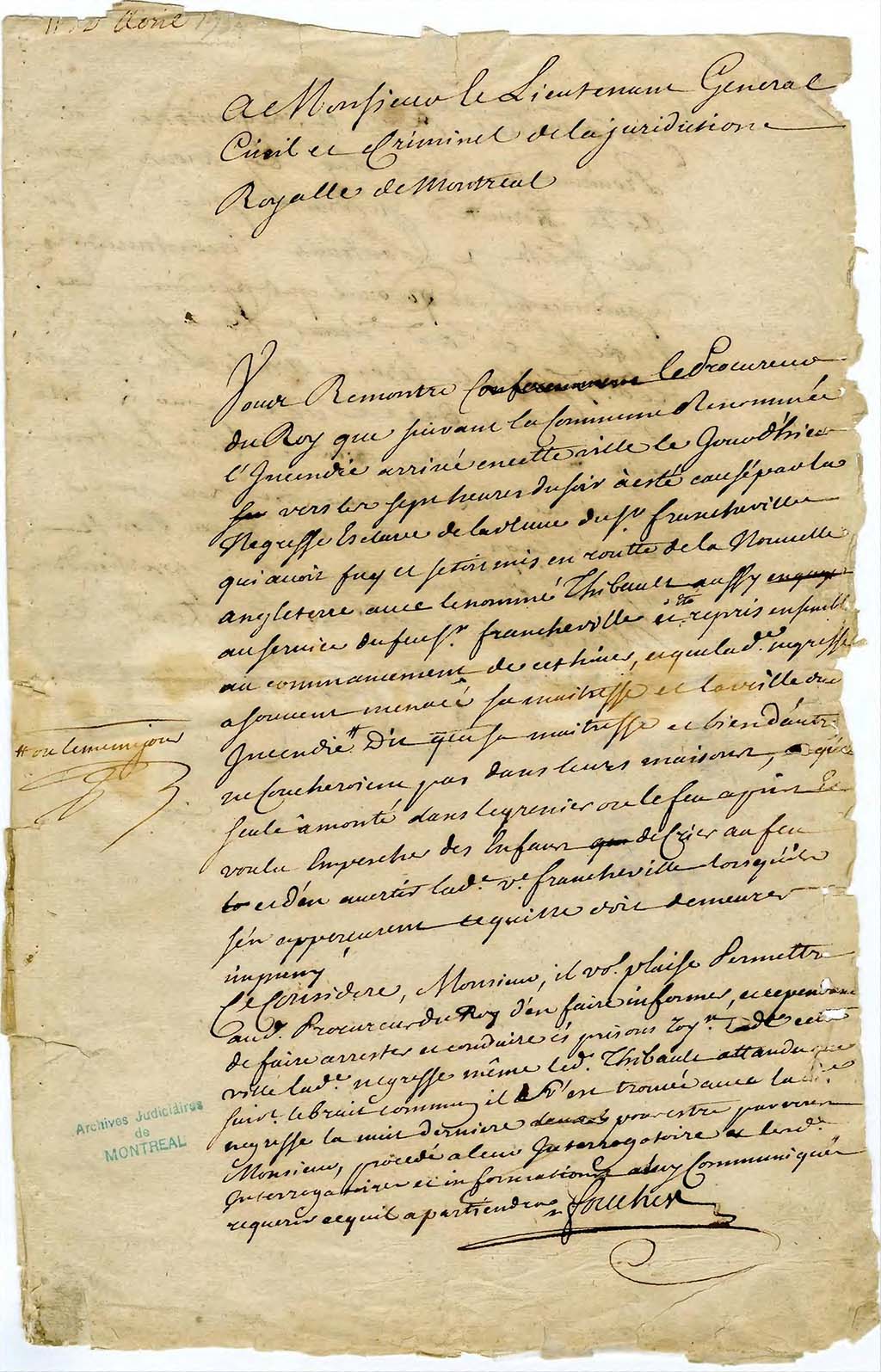 Marie-Joseph dite Angelique was born around the year 1700 in the colony of Madeira, Portugal. It is unclear if she was born a slave or sold into slavery but she was first sold to Nichus Block (Nicholas Bleeker) who took her to North America sometime in the early 1720s. Marie-Joseph lived in New England when she was sold to Francois Poulin de Francheville, a French businessman from Montreal, Quebec in 1725. She was about 25 years old, and when questioned by her new master, she said she had been sold twice since leaving Portugal. Marie-Joseph worked in the home of Francheville in Montreal as a domestic slave and occasionally helped out on the family’s small farm.

Marie-Joseph was baptized into the Catholic church in 1730 and given the additional name Angelique after her new master’s deceased daughter. While in Montreal, Angelique had three children with Jacques Cesar, a black slave from Madagascar who belonged to Ignace Gamelin, a friend of Francheville, but none survived infancy. Francheville died in 1733 and Angelique became the property of his wife, Therese de Couagne. In December, Angelique asked Couagne for her freedom, but when she was denied, she became rebellious, talking back to her owner and threatening her and other servants by saying she would burn down the house with them inside.

By this time Angelique was involved in a romantic relationship with white indentured servant Claude Thibault, who was employed by the Francheville family. In February of 1734, when the widow Francheville traveled abroad, Angelique and Thibault attempted to escape to New England. The couple set fire to Angelique’s bed as a distraction, and ran off. They stopped at a barn in Longueuil, Quebec to eat food previously hidden by Thibault and made it to Chateauguay, Quebec before a winter storm forced them to stop. They were captured and returned to Montreal. Thibault was imprisoned on March 5th and released on April 8th. Angelique was returned to her mistress without further discipline because she was due to be sold to Francois Etienne Cugnet for 600 pounds of gunpowder. She continued to threaten Francheville with burning.

At seven o’clock on the evening of April 10, 1734, a fire broke out in the Merchants Quarter of Montreal, destroying 46 buildings, a convent, and a hospital. Rumors soon spread that Angelique was responsible for the fire. She was found, arrested, and tried. There was insufficient evidence to support the charges, so Angelique was tortured to encourage her to confess. Her legs were bound with wooden planks and ropes, then twisted to crush the bones. Pressured to admit responsibility regardless of the truth, she was found guilty and sentenced to death. On June 21, 1734, she was further tortured in her cell, carried to the steps of the church where she was told to beg for forgiveness of her sins, before being taken to a scaffold built facing the burned-out buildings and hanged. Her body was then burned and her ashes scattered to the four winds.

Angelique became a symbol of freedom and resistance. Her story has inspired poems, songs, books, and plays. In 2012, a public square in Montreal, facing City Hall, was named Place Marie-Joseph-Angelique.