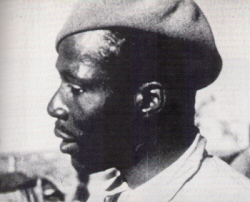 Oliver Law was the first African American in history to lead an integrated American military army. Born in west Texas on October 23, 1900, from 1919 to 1925 he was a private in the U.S. 24th Infantry. He moved to Chicago where he became a cabbie, a stevedore, and worked for the Works Project Administration.

Radicalized during the Great Depression, in 1932 Law joined the Communist Party and led the southside Unemployed Council. He married Corrine Lightfoot, sister of a prominent African American in the Communist party, Claude Lightfoot. Chicago’s Police Red Squad repeatedly arrested him and once seriously beat him.

On August 31, 1935, Law organized a protest against Mussolini’s invasion of Ethiopia. Though the protest was banned by Chicago Mayor Kelly who sent 2,000 police to break it up, 10,000 people attended. Law spoke from a roof top and was arrested.

Law was among the first 2,800 Americans [including 90 African Americans] who formed the Abraham Lincoln Brigade in Spain, joining 40,000 volunteers from 52 nations who sought to keep General Franco, aided by Hitler and Mussolini, from overthrowing Spain’s new Republican government. He received his passport on January 7, 1937 and left for Europe, aboard the SS Paris, on January 16, 1937.

Law’s military experience, bearing, and leadership qualities were highly valued as the commander of a machine-gun company. In March 1937 Law was promoted to Lincoln Brigade Commander. On July 9th Law led his men in an attack on Mosquito Ridge without air, artillery, or tank support and was mortally wounded by enemy machine gunners. Pulled to safety, he said, “I’ll be back in a week or two,” but soon died. His comrades buried him under a simple sign: “OLIVER LAW, THE FIRST NEGRO TO COMMAND AMERICAN WHITE SOLDIERS.”