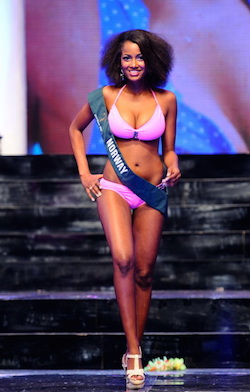 Iman Kerigo is a 22 year old black woman who at the age of 18 was crowned Miss Norway in 2010. She was the first woman of African descent to hold the title. Kerigo and her family are refugees from Kenya. She arrived initially in Great Britain in 2000.  Her family’s experiences during their time in Great Britain, although far better that the personal and political repression which drove them from Kenya, nonetheless were challenging enough to make Kerigo a staunch advocate in Europe in raising awareness about the endemic problems of poverty, war, violence, and domestic abuse as they affected refugees as well as their impact on the larger population.

Kerigo, the second child in a family with three brothers, was born in 1992 in Kenya.  She and her mother struggled with her father who was abusive to both of them.  In 2000 her mother took advantage of an opportunity to leave for Great Britain as political refugees.

After spending a few months in Britain, Kerigo’s family decided to move to Klofta, a small village outside Oslo, Norway in 2000 when she was eight. After a undergoing a waiting period, the family was eventually granted refugee status. Transitioning to life in a Scandinavian nation was complicated by both language and culture barriers.   Eventually Kerigo learned to proficiently speak Norwegian in addition to English and Swahili, the languages of her native Kenya.

Kerigo’s victory in 2010 was not marred by the ugly, racial vitriol that has accompanied the selection of women of African ancestry as national beauty queens in other European or Latin American nations and to some extent with the first Miss America winners, Vanessa Williams and Suzette Charles.  She and others attribute this response to Norway’s long commitment to racial equality which has been tested over the past 20 years by the arrival of thousands of immigrants and refugees from Eastern Europe, Asia, and Africa.  Immigrants account for 12% of today’s Norwegian population.  Africans alone are 2% of the population.

Others argue that because Norway is the home of the Nobel Peace Prize, the nation has gone to extra lengths to promote its image as a welcoming home to all regardless of race or ethnicity. Kerigo also credited her success in the Miss Norway contest to her team of pageant advisors, led by nutrition expert David Sandoval, who prepared her for this rigorous competition by having her follow his carefully designed eating program for celebrities.

After winning the Miss Norway crown in March 2010, Kerigo competed in the 2010 Miss World contest which took place in Vietnam in December of that year.

In the fall of 2011, Kerigo visited to the United States on a two week tour, traveling to Los Angeles, California, Las Vegas, Nevada, and other cities speaking on various issues related to domestic abuse and the integration of immigrants and refugees into their new home nations.