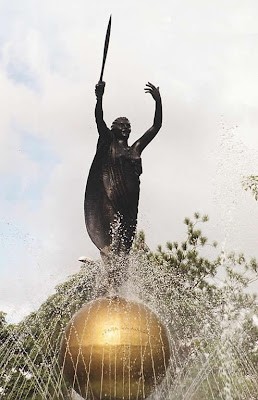 National heroine and revered freedom fighter Juana Ramírez, popularly known as “La Avanzadora” (The Advancer), was born January 12, 1790 in Chaguaramal, Monagas State, Venezuela. Her enslaved African mother, Guadalupe, was purchased by her putative father,  Spanish army general Andrés Rojas. As a child she was given to Doña Teresa Ramírez de Valderrama, from whom she received her surname. As a young woman, Ramírez worked as a laundress in Maturín, Venezuela but was well aware of the swirl of revolutionary events of her era, most prominent being political upheavals in France, North America, and Haiti.

In 1810, Ramírez reunited with her father, who by then had come to oppose Spanish rule of Venezuela. The following year Venezuelans declared their independence from Spain but were challenged by loyalists and Spanish military forces. Possessing intelligence and leadership qualities, she was put in charge of “The Battery of Women,” an artillery unit comprised of 100 women.

Lionized for her fearlessness in battle, Ramirez and her troops were known to attack the enemy and resupply rebel forces with weapons, ammunition, and other war materials. When the Royalist army led by Domingo de Monteverde attacked the Maturín Republicans, as the rebels were called, they responded on May 25, 1813 in what became the Battle of Alto de los Godos. The rebels were led by José Francisco Bermúdez, Manuel Piar, and José Tadeo Monagas. In the heat of combat, Ramírez picked up a dead Spanish officer’s sword and, through gun smoke and a hail of bullets, held it aloft as she continued charging ahead toward the front line, earning her the moniker “The Advancer.” Though substantially outnumbered, the rebels won the battle and vanquished the Royalist army, thanks in part to Ramírez’s daring, morale-boosting deed. In the aftermath of battle, her all-female unit buried the dead, found safe quarters to attend to the wounded, children, and the elderly. They also refurbished their cannons and continued to spy on the enemy.

A series of military reverses forced Ramírez and the rebel army to retreat into the hills, where they established new centers of operation and mounted guerrilla actions. Over time Ramírez became a legend in her own right, celebrated as a model and the embodiment of the strong, self-sacrificing, and patriotic Venezuelan woman. She is sometimes referred to as the Harriet Tubman of Venezuela.

Upon her death from an unknown cause in Maturín on October 23, 1856, Ramírez was buried in a common grave in her hometown of Chaguaramal, where local mourners covered it with cacti. Nearly a century and a half passed until a revival of interest in Ramírez resulted in a monument in Maturín on Bolívar Avenue erected in her honor. In 2015, her symbolic remains were moved to Venezuela’s National Pantheon in the capital city of Caracas. She was interred in the National Mausoleum of Heroes (a first for a woman of African descent) and eulogized by Venezuelan President Nicolás Maduro Moros.