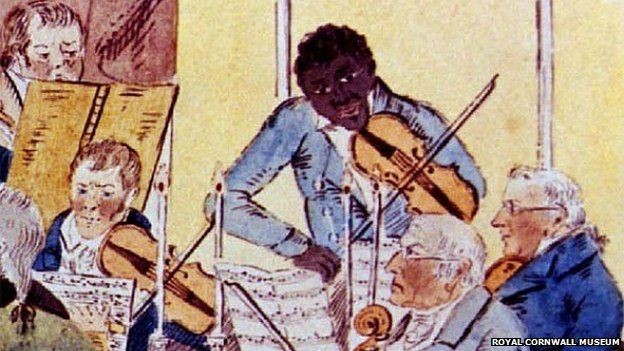 Afro-British musician, composer, and orchestra leader Joseph Antonio Emidy is believed to have been born sometime in the year 1775 in Guinea, West Africa. Enslaved at age 12, Portuguese traders brought him to Brazil, where Jesuit priests, recognizing his natural talent and intelligence, taught him to play the violin. While still enslaved, his owner transported him to Lisbon, Portugal, and provided him with formal music instruction. There Emidy entertained members of the city’s social elite and eventually earned the position of second violin in the Lisbon Opera Orchestra.

In 1795 the British frigate HMS Indefatigable after smashing into a rock sailed into the Tagus River for repairs. The ship’s captain, Sir Edward Pellew, while exploring Lisbon, observed Emidy in an orchestra performance. He devised a plan, with the assistance of sailors under his command, to kidnap the musician and press him into service aboard his vessel.

Emidy was captured, confined to the frigate for four years, and forced to play the type of music the British sailors enjoyed but which he came to detest. Noticing his distress Captain Pellew in 1799, relented and released Emidy in the port city of Falmouth, England. Since slavery had no legal basis in England, Emidy became a free man.

To sustain his new life, Emidy advertised in the Royal Cornwall Gazette for jobs as a music teacher since, by this point, he had mastered the violin, mandolin, guitar, piano, cello, guitar, flute, and clarinet. Accepted by the local population in 1802, just three years after his arrival in Falmouth, a benefit concert was held for him at Wynn’s Hotel. Emidy, already head of the Falmouth Harmonic Society, debuted a violin concerto he had composed. That same year he married Jenefer Hutchins, the daughter of a merchant, with whom he had eight children.

Emidy moved his family to Truro, Cornwall, where he continued teaching music and playing instruments at parties, balls, and benefits. At one point, he performed with concert groups, including the Truro Philharmonic Orchestra, for which he also wrote compositions and which he led from 1816 to 1826. In 1824 he founded the Helston Philharmonic Society. It has been asserted that fearing rejection on account of his race, Emidy avoided composing and performing in London. Had he been accepted by musical circles in the largest city in Great Britain, there is a high likelihood that at least one of his compositions would have survived, and he would have had the opportunity to be appreciated by a much larger audience.

Joseph Emidy died in Truro on April 23, 1835, probably at the age of 60. Proclaimed a genius, a pioneer of classical music, and hailed as “Britain’s first composer of the African diaspora,” Emidy, who is buried in the churchyard of Kenwyn Church in Truro, was remembered in a ceremony in 2015 that included the unveiling of a wooden boss featuring a violin and a map of Africa at Truro Cathedral. A statue of Emidy resides in The Mission to Seafarers Garden in Falmouth.