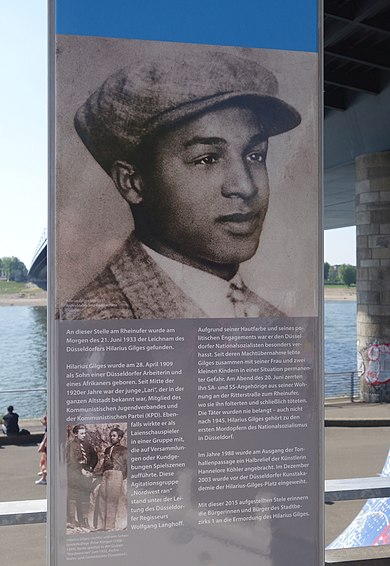 Hilarius Gilges is the only well-publicized example of a native German of African descent who actively opposed the rise of Nazism in his nation prior to the onset of World War II. Born in Düsseldorf on March 4, 1909 (some sources say April 28, 1909), he was the son of Maria Stüttgen, a textile worker, and an unnamed African, perhaps from one of Germany’s African colonies. When his mother married a native German, he was given the family surname, Gilges.

Growing up the darker-skinned mixed-race Gilges often suffered racial insults and discrimination. Perhaps in response he was drawn to the egalitarian aspects of communism. In 1925 at age 17 he joined the Young Communist League of Germany (Kommunistischer Jugendverband Deutschlands, or abbreviated KJVD), the youth wing of the Communist Party which at its height had a membership of 1,000.

A tap dancer and actor, in 1930 he co-founded the communist theatrical group called the Nordwest Ran which employed a mobile stage on which actors and musicians conveyed to audiences the advantages of revolutionary, scientific socialism in opposition to the bigotry and inhumanity of Nazism. That growing threat, led by Adolf Hitler encouraged Gilges and his comrades to engage in more street demonstrations and protests but by the early 1930s communists in Germany were in retreat.

In 1931 at a huge Marz-Gedenfeier demonstration, Gilges was lured into a fight with right-wing racists and was arrested by police sympathetic to his attackers. A Düsseldorf court sentenced him to a year in prison. Released from custody after several months, during the 1932 election year Gilges crisscrossed the lower Rhine region warning people in numerous towns about the dangers of Nazism. By now an easily recognized figure among communist agitators, his enemies felt the time was ripe to kill him.

In the wake of the Nazi political triumph in 1933 communists were rounded up and imprisoned. Gilges was keenly aware of his vulnerability but he also had a wife (Katharina Hubertine Laatsch) and two children to consider. His color precluded hiding in plain sight and the idea of going underground was not a realistic option. On the night of June 20, 1933, Gilges was confronted by Nazis at his Düsseldorf apartment. According to his family, SS officers dragged him away in front of his wife and child. Tortured before he died, Gilges was stabbed 37 times, his arms were dislocated, and he was shot in the head. His body was then dumped into the Rhine River. No one was prosecuted for his murder.

Though the post-war West German government refused his family compensation for his death when World War II ended, memorials to the young martyr were placed in Düsseldorf, including a portrait in relief on a plaque near his site of his murder which was placed there in 1998. In 2003 a plaza not far from the Düsseldorf Academy of Arts was named in his honor.