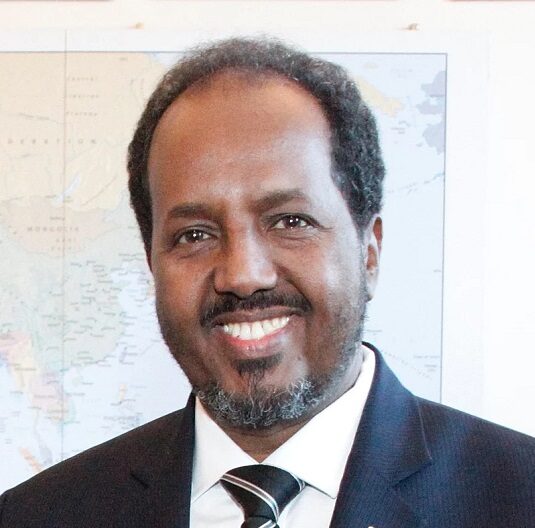 Hassan Sheikh Mohamud, the current President of Somalia, Union for Peace and Development Party leader, and member of the Abgaal Hawiye clan, was born on November 29, 1955, in the town of Jalalaqsi, in the south-central Hiran province of Somalia. Mohamud attended primary and secondary schools in Jalalaqsi, and at 26, he received a Bachelor of Arts degree in technology from Somali National University in Mogadishu, the capital city of Somalia, in 1981.

Hassan Mohamud married Qamar Cali in 1981. In 1984, he became a member of the faculty at the Technical Teacher Training College (TTTC) in the Hodan district of Mogadishu and remained there until he left for India in 1985. In 1986, Mohamud earned a Master of Arts degree in technical education from Bhopal University (now Barkatullah University) in Madhya Pradesh, India. In 1990, Mohamud married Sahro Cumar Xasan. Eleven years later in 2001, he completed intensive courses in conflict resolution at the Eastern Mennonite University’s Summer Peacebuilding Institute in Harrisonburg, Virginia.

In 2012, Mohamud was installed as President of Somalia. As the nation’s first democratically elected president, he was honored in TIME magazine’s annual list of the 100 most influential people in the world in 2013. Two years later in 2015, he signed the United Nations Convention on the Rights of the Child on behalf of the Federal Republic of Somalia.

In 2017, after six years as the country’s president, Mohamud yielded power to a new President, Mohamed Abdullahi Mohamed, who served until 2022. However, in the 2022 election, Mohamud, the father of seven children, defeated the incumbent President Mohamed in a protracted contest decided by national legislators picking the head of state in secret balloting. After three rounds of balloting, Hassan Sheikh Mohamud received 214 votes while the President received 110 ballots. He then conceded to Hassan Mohamud who became Somalia’s 8th president.

Newly elected President Hassan Sheikh Mohamud won the majority of support in the Somalia Parliament by holding his predecessor responsible for failing to rein in Al-Shabaab, the Somalia-based Islamic insurgence group operating in that nation as well as Kenya and Yemen. Al-Shabaab controls a large portion of Somalia and makes periodic attacks on the government and civilians in Mogadishu. President Mohamud and his predecessor, former President Mohamed, have relied on African Union forces which have maintained a significant military base near Mogadishu since 2017. The new president promises to act as a regional peacemaker in the Horn of Africa by repairing the dysfunctional relationship between Eritrea and Ethiopia and by restoring ties with Ethiopia after three decades of intermittent conflict over the Ogaden region which both nations claim.