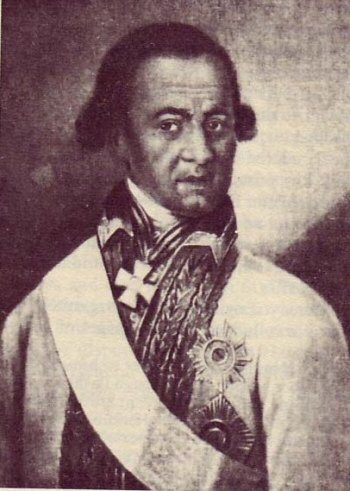 Sold into Turkish slavery, Abram Petrovich Hannibal was brought as a black servant to Czar Peter I, known as Peter the Great. He became one of the royal favorites, a general-in-chief, and one of the best educated men in Russia in his era. His great-grandson was Alexander Pushkin, the famous Russian writer who later glorified the deeds of his black ancestor in his book, The Negro of Peter the Great.

Hannibal was born on an unknown date around 1696 in the principality of Logon in present day Cameroon. Abducted by a rival ethnic group, Hannibal was sold to Turkish slave traders who brought him to Constantinople in 1703. As an eight-year-old boy he was brought to the court of Peter the Great who adopted him immediately. Being the Czar’s godson, Hannibal assumed his name, Petrovich, and became his valet on Peter’s various military campaigns and journeys. When the Czar visited France in 1716, Hannibal was left behind in Paris to study engineering and mathematics at a military school. Two years later, he joined the French army and fought in the war against Spain. In January 1723, Hannibal finally returned to Russia.

To Hannibal’s misery, his protector, Peter the Great, died in 1725, leaving the young black artillery lieutenant dependent upon the royal advisor Prince Menshikov, who, due to his dislike of Hannibal, assigned him first to Siberia and later to the Chinese border where his task was to measure the Great Wall.

Hannibal’s fortunes changed in 1741, when Empress Elisabeth took the throne and Hannibal was allowed to officially return from his exile although in fact he had done so clandestinely in 1731. Five years after his illegal return, he married his second wife, Christina Regina von Schöberg, the daughter of a Swedish army captain, who bore him eleven children. One of his sons, Osip, was the grandfather of the poet Alexander Pushkin.

Although it had been Hannibal’s wish to retire, Empress Elisabeth did not want to abandon him or his engineering skills. He was made military commander of the city of Reval, serving between 1743 and 1751 and by 1760 had been promoted to the rank of a full general. During his military career he oversaw various projects including part of the expansion of the 73 mile Ladoga Canal near St. Petersburg which linked the Neva and Svir Rivers, and Russian fortresses throughout the empire. Abram Petrovich Hannibal died on April 20, 1781, as one of the leading military figures in his country and probably the first outstanding engineer in Russian history.