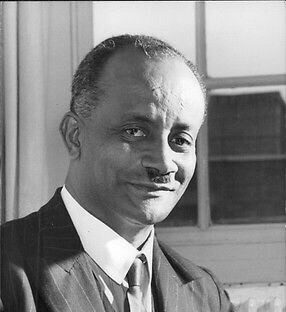 Sir Grantley Herbert Adams was a Barbadian politician. He was the first Prime Minister of Barbados from 1953 to 1958 and then became the first and only Prime Minister of the West Indies Federation from 1958 to 1962. He was one of the co-founders of the Barbados Labour Party (BLP) and was named one of Barbados’ national heroes in 1998.

Grantley Herbert Adams was born on April 28, 1898, at Colliston, Government Hill, St. Michael, Barbados. He was the third child of seven children born to Fitzherbert Adams and the former Rosa Frances Turney. He was educated at St. Giles and Harrison University in Barbados. In 1918, he won the Barbados Scholarship and studied at Oxford University the following year.

His political interest began when he was still a law student in England. At Oxford he became a member of the Liberal Party, feeling that his views were most in line with those of the Asquithian Liberals, who advocated private enterprise and trade. Within the Liberal ideals of the time, support for trade unions, representative government, land reform, and reform of the tax system were all directed toward the overarching goal of promoting free trade.

Adams’ entry into the Barbados House of Assembly in 1934 was secured by his role in breaking up the Socialist League, while also bankrupting one of the main journalistic voices in support of workers’ rights. Thus, Adams consolidated his position by linking the fractured Labour movement he had smashed with his liberal ideals. His actions caused a backlash that led to the 1937 labor uprisings and the formation of the Barbados Labour Party in 1938.

Adams was president of the Barbados Workers’ Union (BWU) from 1941 to 1954 and became the first Prime Minister of Barbados in 1953 as well as Minister of Finance in 1954. Four years later, he became Prime Minister of the West Indies Federation, defeating Ashford Sinanan by a two-vote margin. (Sinanan later became Opposition Leader of the Democratic Labour Party of Trinidad). Adams held this office from 1958 to 1962.

Following the official dissolution of the regional federation on May 31, 1962, Sir Grantley Adams (he was knighted by Queen Elizabeth in 1957) returned home. He was re-elected to the House of Assembly in 1966 and assumed the role of Leader of the Opposition. As his health declined, he retired from public life in 1970.

Sir Grantley Herbert Adams was married in St John’s Church in 1929 to his wife Grace Thorne, the daughter of an elite planter family. Their only child, J.M.G.M. ‘Tom’ Adams, won the Barbados Scholarship himself, attended Oxford, and became a lawyer. Tom Adams later became the second Prime Minister of Barbados. He died at the age of 73 on November 28, 1971, and was buried in the Cathedral of St Michael and the All Angels, Barbados.

Grantley Adams International Airport, formerly Seawell Airport, in Christ Church, Barbados, was named after the former prime minister in 1976. A statue in honor of Adams stands in front of the seat of government on Bay Street in St Michael. Adams is depicted on the front of Barbados’ $100 note, popularly known as the “Grantley”.