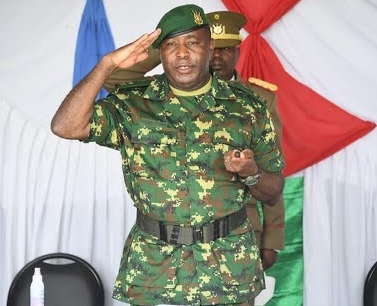 General Évariste Ndayishimiye, the current President of Burundi, was born on June 17, 1968, in Giheta, Burundi. After serving in the Burundi Army for decades, in 1991, he began studies in law at the Université du Burundi in Bujumbura. However, during his second year in 1993, his legal education was interrupted by the civil war and ethnic divisions between the Hutu (Bantu, vast majority) and the Tutsi (traditional aristocratic minority) ethnic groups, which cost at least 300,000 lives in Burundi during its thirteen years of civil war.

In 2003, Ndayishimiye married Angélique Ndayubaha Ndayishimiye, an economist and the President of the Good Action Foundation “Umugiraneza.” She was born in the Kiganda area of Muramvya district, Burundi. They are the parents of six children.

From 2006 to 2007, Ndayishimiye was the Interior and Public Security Minister for Burundi and from 2007 to 2014, he served as the personal military aide to President Pierre Nkurunziza. In 2014 he received a Bachelor of Laws from Université Sagesse d’Afrique in Bujumbura in 2014 and chaired the Burundi National Olympic Committee. Two years later, in 2016, General Ndayishimiye became the Secretary-General of The National Council for the Defense of Democracy – Forces for the Defense of Democracy, a new Burundi political party. In 2018, Ndayishimiye was endorsed by President Nkurunziza as his replacement for President after the incumbent decided not to run for a fourth term.

On June 18, 2020, Ndayishimiye was hastily sworn in as the 9th president of Burundi in the capital city of Gitega after winning 68 percent of the national vote in an election marred by violence and the untimely death of Nkurunziza ten days earlier. Opposition leaders claimed the election was rigged but Ndayishimiye vowed to “preserve and promote the country’s independence, love, and equitably achieved development. He immediately had four journalists and two human rights defenders released from prison and announced the pardon or early release of more than 5,000 prisoners.

In 2021, Ndayishimiye addressed the UN General Assembly’s 76th session declaring that refugees who had fled the nation because of ethnic violence were welcome to return. He also announced a strategic action plan designed to protect human rights in Burundi and discussed the restoration of peace, security, stability, and social cohesion in this civil war-torn nation.

In a country where the COVID-19 pandemic remains a threat to thousands of Burundi citizens, Ndayishimiye rejected vaccines from outside the nation and closed its borders to foreigners he claimed for safety. To protect himself again COVID, General Évariste Ndayishimiye did receive sizable doses of the Chinese Sinopharm BIBP vaccine.