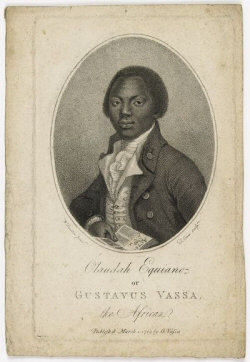 Olaudah Equiano, whose father was an Ibo chief, was born in 1745 in what is now Southern Nigeria. At the age of 11 years, Olaudah was captured by African slave traders and sold into bondage in the New World.  Equiano, given the name Gustavus Vassa by one of his many owners, was forced to serve several masters, among them a Virginia plantation owner, a British Naval officer, and a Philadelphia, Pennsylvania merchant.  While a slave to the naval officer Equiano traveled between four continents. These global experiences within the Atlantic Slave Trade allowed Equiano to produce the most popular and vivid slave narrative of his era.

By 1777 at the age of 32, Equiano, after having mastered reading, writing and arithmetic, purchased his freedom.  He settled in England, befriended Granville Sharp, the first prominent British abolitionist, and soon became a leader of the emerging anti-slavery movement.  Equiano presented one of the first petitions to the British Parliament calling for the abolition of slavery.

In 1787 Equiano became the first person of African ancestry to hold a post in the British Government when he was appointed to the post of Commissary for Stores to the Expedition for Freed Slaves.  This abolitionist-supported venture would create the West African nation of Sierra Leone. At first pleased with the position, Equiano soon began to witness fraud and corruption among those responsible for providing supplies for the expedition.  His unwillingness to accommodate this malfeasance led to his dismissal.

Equiano, however, continued to work with leading British abolitionists including William Wilberforce and Thomas Clarkson who urged Parliament to abolish the Slave Trade. He also interjected his own history into the struggle when in 1789 he wrote and published his autobiography titled The Interesting Narrative of the Life of Olaudah Equiano or Gustavus Vassa the African, Written by Himself.  His narrative soon became the first “best seller” written by a black Briton.  Among those who purchased copies of his narrative were the Prince of Wales and eight dukes.  Equiano also embarked on a lecture tour of England, Scotland, Wales and Ireland to promote his book particularly among the growing number of abolition committees it spawned.

The intriguing title of Equiano’s autobiography is likely a reflection on other slave narratives that were heavily edited. Equiano’s autobiography, however, like that of his American counterpart, Frederick Douglass, which appeared half a century later, is deemed most authentic. Equiano’s narrative is more than descriptive. Unlike most slave narratives, he advanced a number of religious and economic arguments for the abolition of slavery.

Equiano married an Englishwoman, Susanna Cullen, in 1792.  The couple had two daughters, one of whom survived to inherit her father’s estate.  Olaudah Equiano died in 1797, ten years before the slave trade was abolished and 36 years before Parliament outlawed slavery throughout the British Empire.