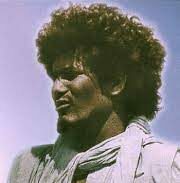 El-Ouali Mustafa Sayed was the first president of the Sahrawi Arab Democratic Republic (formerly known as Spanish Sahara or Western Sahara). Sayed was born in 1948. Bir Lehlou has been cited as his birthplace. Other authorities believe he was born in a nomad encampment on the desert plains in eastern Spanish Sahara.

El-Ouali’s parents were poor, and his father was disabled. Due to his father’s disability, the family was forced to abandon the traditional nomadic lifestyle of the Sahara. They settled in the city of Tan-tan not far from their traditional homeland of Spanish Sahara. El-Ouali attended primary school in Tan-Tan; graduating in 1962. He then attended the Islamic Institute in Taroudant, Morocco for secondary school where he proved to be an impressive student. His academic prowess earned him a scholarship to a university in Rabat, Morocco. He studied political science. He became the first alumnus of a Moroccan university to achieve a score of 19 out of 20 in the rigorous Constitutional Law examination.

While at the university El-Ouali met other Sahrawi (people from Spanish Sahara). Most were unhappy with Spanish rule and were willing to work for independence. An anti-colonial organization, Harakat Tahrir, had been established in Spanish Sahara that called for independence. On June 17, 1970, leaders of the group held a rally in Zemla where they called for demonstrations against Spanish occupation of Western Sahara. The Spanish Legion was alerted and in the ensuing violence at least 11 demonstrators were killed. The Zemla Intifada (uprising) led to the Spanish arresting hundreds of Sahrawi and deporting many others. Harakat Takir was destroyed. Sayed and his friends concluded that supporters of the anti-colonial movement would have to use force to gain Sahrawi independence.

In 1972 Sayed returned to Tan-Tan where he began organizing an anti-colonial movement. After a demonstration in Tan-Tan in June 1972 supporting Sahrawi rights, a group of 20 participants including Sayed were detained and tortured by the Moroccan police.

In 1973 El-Ouali and other Sahrawi from Spanish Sahara, Mauritania, and Algeria met and organized the Polisario Front (the Popular Front for the Liberation of Saguia el-Hamra and Río de Oro). A few days later, on May 20, 1973, El-Ouali and six others raided El-Khanga a Spanish military garrison in the desert. Other strikes followed on isolated targets, in which the Polisario fighters gathered weapons and equipment until they were finally able to engage in full-scale guerrilla warfare.

In August 1974, El-Ouali was elected secretary-general of Polisario. In 1974-1975, the Polisario Front seized control over the desert countryside. By 1975 the Spanish were confined to the major towns and cities in Spanish Sahara. The Spanish reluctantly entered negotiations with Polisario. In late 1975 Morocco and Mauritania jointly invaded and partitioned western Sahara with no resistance from the Spanish. El-Ouali and thousands of Sahrawi fled to the Tindouf refugee camps in Algeria. At Tindouf, El-Ouali became the President of the Sahrawi Arab Democratic Republic in exile. Polisario received support from Algeria and Libya in the conflict with Morocco and Mauritania. Well respected by his followers, El-Ouali was charismatic and was revered for fighting on the front lines with his men.

On June 9, 1976, El-Ouali was killed by a gunshot through the head at Inchiri, Mauritania during a Polisario raid on Nouakchott, the capital of Mauritania. He was 28 years of age. El-Ouali is revered as a Father of the Nation by the Sahrawi refugee population. There is a simple stone memorial built in his honor in the desert.