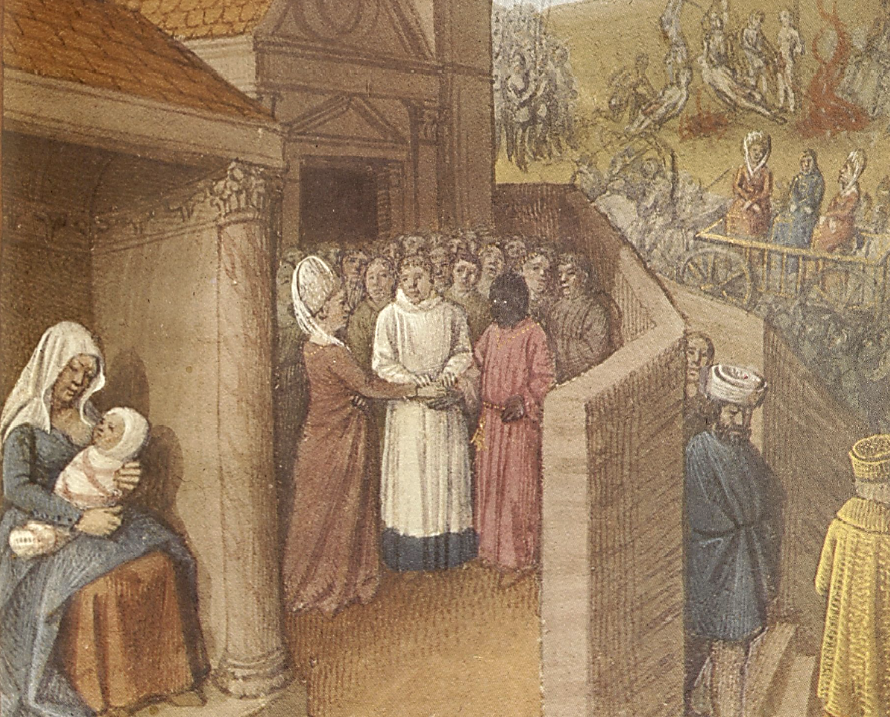 Illustration of the Wedding of Raimondo of Campania and Philippa of Catania by Jean Fouquet, 1458
Public Domain Image

Although the African ancestry of Alessandro de’ Medici (1510-1537), the first Duke of Florence, is widely known, few people are aware of Raimondo di Cabanni who a century earlier exercised significant authority in late-medieval Italy. He was a slave purchased from pirates by a Neapolitan merchant, and details of Raimondo’s birth and youth—and his original name—are not known.  Alternately referred to as an Ethiopian or Moor, he was baptized a Christian, and rose from kitchen bondsman to head chef in the palace of King Charles II of Naples, replacing his overseer whose name he assumed upon becoming a freedman. Highly respected for his abilities, and with an increase in wealth and authority in the palace, he was rewarded for his service by an appreciative king, who arranged his marriage in 1305 to Philippa Catanese, a former Sicilian washerwoman and wet nurse whose intelligence and ambition enabled her to rise to become governess and trusted advisor of Queen Joanna I of Naples.

Raimondo was next appointed Master of the Royal Wardrobe, a position that entailed maintaining the king’s clothing and jewels, and performing routine manservant duties. Also reputed to be a valiant soldier in the Neapolitan army, he was elevated to commander and knighted. As Raimondo’s career advanced so did Philippa’s influence and prominence in the court of King Roberto, and of his granddaughter and successor, Queen Joanna. As Raimondo’s and Philippa’s family wealth and property acquisitions grew so did the number of children in their household.  The first born was Carlo, followed by Perroto, then Roberto, who was the most successful of their sons and whose latter employment during Queen Joanna’s reign mirrored in some degree that of his father.

Due largely to the influence of Philippa, Raimondo reached the pinnacle of his career when he was appointed Palace Seneschal, the person in charge of domestic arrangements, who directed the servant staff at Castel Nuovo, and who served as chief counselor to the king. The celebrated writer-poet Giovanni Boccaccio seemed annoyed by the black upstart when he wrote in 1373, “What a ridiculous thing to see an African from a slave prison, standing before Robert, the king, performing royal service for the young nobleman, governing the court, and making laws for those in power.”  Not until the rise of Alessandro de’ Medici a century later, would of person of African descent achieve such distinction in Europe. Philippa, meanwhile, a surrogate mother-figure for Queen Joanna, was made Countess.

Raimondo died in 1334 and was buried in a marble tomb alongside other former dignitaries in the Cathedral of St. Chiara in Naples.  Within six years, however, the tragic downfall of his family had begun: his sons, Carlo and Perroto, died, and Philippa, Roberto, and Carlo’s daughter, Sancia, met a terrible end.  Caught up in the swirl of deadly palace and international intrigues, the trio had been blamed, among others, for the assassination of Queen Joanna’s husband, Prince Andrew of Anjou. Roberto, who grew up observing the protocols of the royal court and who inherited Raimondo’s post as Palace Seneschal, was set upon by a mob, while Philippa and Sancia, targeted by a vengeful King Louis I of Hungary, Prince Andrew’s brother, were also horribly tortured and executed.