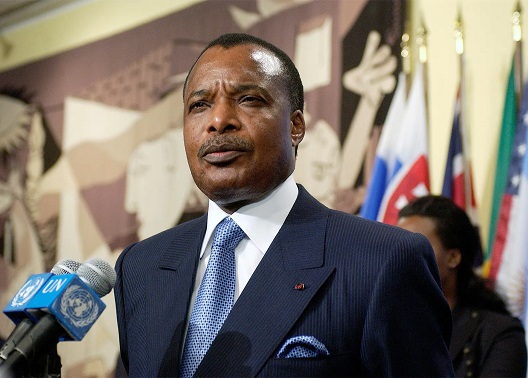 The long-serving president of the Republic of Congo (Congo-Brazzaville), Denis Sassou-Nguesso was born on November 23, 1943 in Edou. His parents were Julien Nguesso, a noted hunter-chief, and Emilienne Mouebara. Denis Sassou-Nguesso attended elementary school in Owando and was also initiated in the Mbochi tribal cult. Between 1956 and 1960 he attended the Dolisie Normal College in Loubomo, Republic of the Congo.

Sassou-Nguesso joined the army in 1960. In 1962 he was sent to Algeria for reserve officer training. Later he attended the Infantry School in France. He then returned to Congo to join and lead an elite paratroop regiment. In 1963 Sassou-Nguesso was appointed commander of military forces in Brazzaville.

Sassou-Nguesso helped form the Congolese Labor party with Marien Ngouabi in 1969. The party was Marxist-Leninist. That same year he was part of a military coup that ousted President Massemaba Debat and installed Ngouabi as president. On May 18, 1973, Sassou-Nguesso, was made Director of the State’s Security and Minister of Defense. He was 32 years old at the time.

With pressure from Western countries, opposition parties were legalized in1990. In the 1992 presidential election Sassou-Nguesso was eliminated in the first-round. Pascal Lassouba was elected president. After parliamentary elections in 1993 fighting broke out between militias loyal to Lassouba and Sassou-Nguesso. This civil war lasted until December, 1995. Over 2,000 Congolese were killed and 100,000 displaced during the conflict.

Civil war broke out again in 1997 between Lassouba and Sassou-Nguesso supporters. With the help of Angolan troops Sassou-Nguesso was victorious. He was sworn in as president on October 25, 1997. However, fighting continued until 1999. Thousands died and over 800.000 were displaced.

A presidential election was held in 1992 and Sassou-Nguesso was re-elected and again in 2009. In 2015 the constitution was changed to allow him to run for a third term. In the March 2016 election, he was re-elected but many observers believed the election process was unfair. In 2021 Sassou-Nguesso he was elected for another five-year term.

Sassou-Nguesso has been accused of embezzlement, misuse of public funds, and money laundering. In May 2009, a French Court announced an investigation into whether Sassou-Nguesso had plundered state coffers to buy luxury homes and cars in France. Sassou-Nguesso’s son, Denis-Christel, a member of the national legislature and cabinet minister for international cooperation, has been charged with corruptly obtaining $50 million from the national treasury. His daughter, Claudia Lemboumba, a member of the national legislature and head of the presidential communications office, has been accused of using $20 million in government funds to purchase a flat in Trump Towers in New York City. Another daughter, Julienne, has been accused of money laundering.