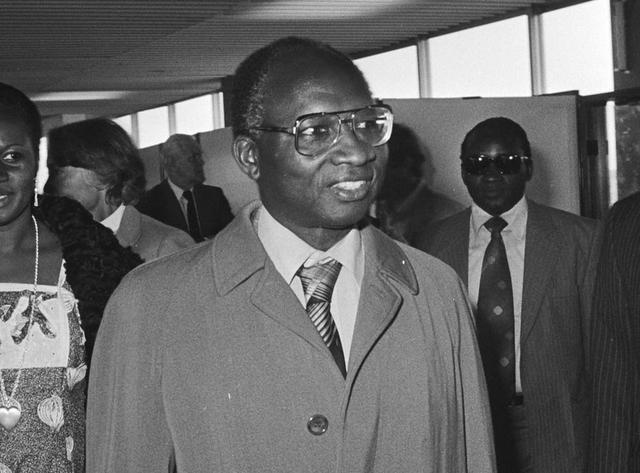 Dawda (David) Jawara was the first Head of State of independent Gambia. He was born on May 16, 1924, at Barajally, MacCarthy Island, The Gambia (then a colony of Great Britain). His parents were Mamma Fatty and Almami Jawara, a prominent trader in the colony. Jawara was educated at a Methodist boys’ school in Bathurst (Banjul) the capital and largest city in the colony. He then attended the University of Glasgow in Scotland. In 1953 he qualified as a veterinary surgeon. Four years later (1957) he was the principal veterinary officer in the colony.

In 1959 Jawara joined the Protectorate People’s Party and soon became party leader. The party’s name was changed to the People’s Progressive Party under his leadership. The next year, 1960, he won a seat in the Gambian colonial legislature and was appointed Minister of Education for the colony. He oversaw 80 schools with a combined enrollment of 13,000 students.

In 1962 Jawara won a national election to become Prime Minister of the colony. He worked closely with the British to achieve Gambian independence and on February 18, 1965, Gambia became independent with Jawara as Prime Minister. He was to lead his party to victory in elections in 1966, 1972, 1977, 1982, 1987, and 1992. Gambia was not a one-party state and was admired for its smooth functioning parliamentary democracy.

In July 1981 Jawara traveled to Britain to attend the wedding of Prince Charles. On July 30 a small group of military men attempted a coup. They accused Jawara and his government of corruption and squandering of public funds. Jawara appealed to Senegal for assistance and that nation in response dispatched troops to Gambia. Over 600 lives were lost in subsequent fighting but Jawara was reinstated as head of state.

Jawara continued to preside over development in the country. By 1990 over 70% of Gambian children were attending school. Ten hospitals and sixty clinics had been built throughout the small nation. The tourist and fishing industries were booming. Unexpectedly, a group of soldiers led by 29-year-old Lieutenant Yahya Jammeh seized power in a bloodless coup d’état on the morning of July 22, 1994. Jawara escaped to Senegal on board a U.S. warship and from there made his way to London. The coup leaders installed a five-man ruling council and dissolved the Gambian constitution.