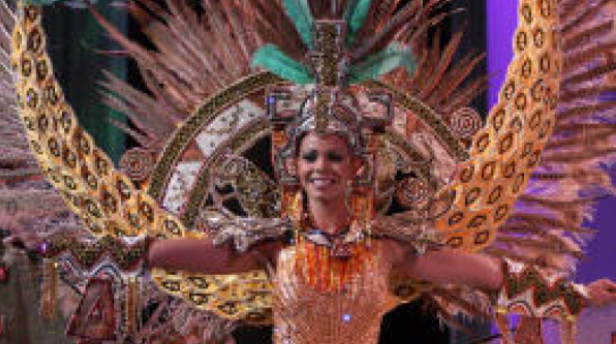 Ericka Yadira Cruz Escalante became the first Miss Mexico of African descent. With that victory she completed in the Miss Universe pageant in Roberto Clemente Stadium in San Juan, Puerto Rico in 2002. Cruz was born in Mérida, Yucatán, México, on November 16, 1981 to parents Yadira Maria Escalante and Martin Cruz Alain Sena. She has two brothers, Martin and Glorevy. Currently, she is married with two children.

Cruz had an unusual background for a successful beauty contestant.  She was a widely recognized athlete before she was a beauty queen. She represented her home state of Yucatán in various sports competitions and has held the state long jump record since 1995.  In 1997 Cruz won a bronze medal in the Central American Games in San Salvador, El Salvador, also for the long jump, and for the 4×100 relay.

Ericka Cruz has a Master’s degree in early education and teaches modeling. In a recent interview about her philanthropic work for world peace, Cruz was asked which historical figure did she most identify with and why? She said, “Benito Juárez, because I fight for the rights of Mexicans.” Benito Juárez was the Mexican president in the mid-nineteenth century during the turbulent period when the French in 1862 occupied the nation and imposed a puppet ruler, Maximillian of Habsburg, the Archduke of Austria, as Emperor of Mexico. Juárez was the president who led the forces which defeated the French and deposed the Emperor in 1867.  Many in Mexico compare him to the United States’ Abraham Lincoln in that he saved the nation at the moment of its greatest crisis.  Also, Juárez was one of the few presidents in modern Mexican history who was visibly of Indian ancestry.

Mexico was not the only country to send their first black woman to an international beauty pageant in the year 2002. Sweden, Peru, Honduras, the Dominican Republic, and Colombia all selected women of African or part African ancestry as well.  In many cases, and somewhat for Ericka Cruz, controversy followed the selection of black women to represent these countries in the Miss Universe Pageant. Some critics said they did not represent their countries of origin due to their blackness. The selection of Ericka Yadira Cruz Escalante, and other women of African heritage, represents a major challenge to ideas about beauty in general and what is considered the appropriate appearance of national representatives.  Their very visible presence in these contests reflects the call for racial and ethnic inclusivity in their respective countries.