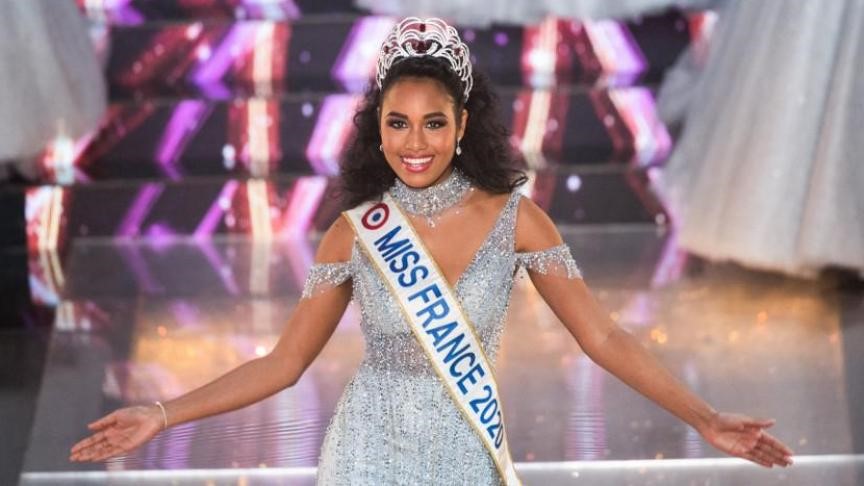 Clémence Botino, born to an Indo-Caribbean mother, Katia Botino, and an Afro-Caribbean father, Oliver Botino, on January 22, 1997, in Baie-Mahault on the French Caribbean island of Guadeloupe, was named Miss France 2020. Her parents encouraged her interest in fashion, dance, music (she plays piano), and art. Fluent in English, upon finishing secondary school in 2014, she studied at an international school in Miami, Florida. Two years of preparatory literary education at the Lycée Gerville-Réache in Basse-Terre, Guadeloupe, preceded matriculation in 2018 at the Sorbonne in Paris, France, where she eventually earned her master’s degree in art history.

The 5’9″ tall Botino won her first major beauty pageant as Miss Guadeloupe on August 3, 2019, automatically qualifying her for entry in France’s national competition for Miss France 2020. At Dôme de Marseille on December 14, 2019, she impressed judges in the onstage question/answer round. Botino edged out her nearest rival to become Miss France 2020, thus becoming the third Black woman from Guadeloupe to win the title and the fourth Black woman to be crowned Miss France (Véronique de la Cruz in 1993, Sonia Rolland in 2000, Chloé Mortaud in 2009, and Clémence Botino in 2020). A television audience of 8.3 million watched her coronation.

By the time Botino’s reign ended in mid-December 2020, the world was in the terrifying grip of a pandemic. Sent to Eilat, Israel, to represent France in the 2021 Miss Universe pageant in the Universe Dome, Botino first made headlines for contracting the coronavirus (COVID-19). Though she was fully vaccinated and had tested negative before leaving France, she nonetheless tested positive when she arrived in Israel. She was quarantined for ten days in a government-designated hotel in Jerusalem before being allowed to mingle with contestants.

Botino next received much news reporting and internet chatter for her choice of clothing in the national costume parade phase of the competition. Aware of the historical, artistic achievements of the American-born expatriate turned French citizen Josephine Baker, she wore an outfit described by one reporter as “a lingerie set adorned with jewels and majestic feather wings, was also carefully chosen by Clémence Botino herself.” She later commented about her design preference that paid homage to her hero: “(Baker) was an artist who deeply loved her art. I wanted to represent a very modern Josephine . . . She was an activist, a feminist, she fought for equality between women and men. She’s a Black woman too, we have that connection.” Botino was not victorious at the 70th edition of the Miss Universe pageant as she tripped over her evening gown. Due to her physical attractiveness, poise, and costume choice in the pre-selection event, she placed among the top ten contestants, the best showing by someone representing a European nation.

Botino is a member of Les Bonnes Fées, a French association mainly devoted to improving the lives of vulnerable, ailing, and underprivileged women. She continues to model and study Caribbean fashion history.