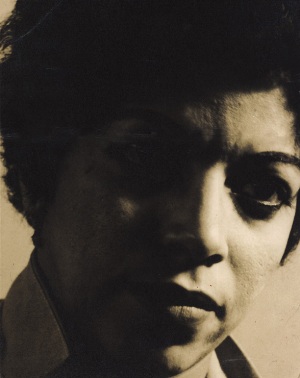 Clara Ledesma was one of the leading Dominican artists during the post-World War II era. Born in Santiago De Los Caballeros, DR, on March 5th, 1924, to Bienvenido Ledesma Piera and Beatriz Christian, Ledesma began her artistic journey in the 1930s, under the tutelage of renowned Dominican artist Yoryi Morel.

Ledesma continued her studies, becoming one of the first women to enroll in the Escuela Nacional de Bellas Artes, or the National School of Fine Arts, Santo Domingo, DR. After graduating in 1948, Ledesma won the Grand Prize for Fine Art Painting in Sculpture in 1948. She also returned to the National School as a professor of drawing and continued her career as Deputy and Vice-director of the Escuela Nacional de Bellas Artes during the early 1950s.

Ledesma took her skills, both natural and learned, and applied them in opening an independent studio in 1951 where she displayed artwork of leading Dominican artists, including her work.

With a scholarship from the Institute of Hispanic Culture of Madrid, Spain, Ledesma became internationally famous, traveling to and displaying her work in Madrid, Paris, Sao Paulo, and Mexico City. She won the Nicaragua Prize from the Madrid Biennial, the Gold Medal from the Madrid Biennial, and First Prize at the Santo Domingo Biennial in 1958. While in Europe, Clara Ledesma also met her husband and fellow Bolivian artist, Walter Terrazas.

After returning from Europe, Ledesma Terrazas displayed her works in her home country, winning Second Prize with her painting Twilight in a Village, in 1960. The following year she traveled to New York City to accept a position at the Contemporaries Gallery of New York. She also opened another independent studio and gallery in New York City.

Clara Ledesma Terrazas spent the rest of her life in New York City until her death on May 25th, 1999, at 75. Ledesma was a trailblazer for Afro-Latinas through her artistic style which displayed the beauty of Native and Afro-Latino life, an idea that did not exist in the Eurocentric views of the post-World War II era. She is credited with influencing the foundation of current Latin-centric art and its prevalence in art worldwide.