Charles Turnbull’s early education began in 1941 at the Leonard Dober Elementary School on Kronprindsens Gade. He graduated from Charlotte Amalie High School in 1952 where he was mentored by Caribbean poet and Harlem Renaissance contributor José Antonio Jarvis. Two years later, in 1954, through the guidance of Dr. Alonzo Graseano Moron, Hampton Institute’s (now Hampton University), the first black president who was also from St. Thomas, Turnbull received a Ford Foundation fiver year scholarship to further his academic endeavors. A president of the sophomore and senior classes at Hampton, he received a Bachelor of Arts degree in history, with honors in 1958. While at Hampton he joined Alpha Phi Alpha Fraternity, Inc. The following year, 1959, he earned a Master of Arts degree in Secondary Education from Hampton.

After working briefly as an elementary school teacher in Hampton, Turnbull returned to the Virgin Islands in 1959. He continued to teach in elementary and high school and eventually became the principal of Charlotte Amalie High School. In 1967, he was appointed the Assistant Commissioner of Education for the Virgin Islands. Turnbull also became involved in politics and served as an elected delegate to all five Constitutional Conventions held between 1964 and 2009. He was the Secretary of the Second Convention in 1972. 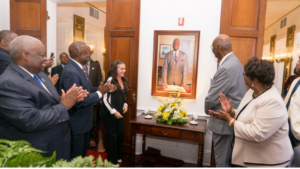 In 1974, Turnbull released his book, Casper A. Holstein: Unusual humanitarian (Charlotte Amalie: VI Department of Education). This book is based on the unusual mixture of a number of racketeering life and philanthropic responsibilities of perhaps the most prominent Virgin Islander living in New York and active in the Harlem Renaissance.

Turnbull earned the Doctor of Philosophy degree in Educational Administration from the University of Minnesota in Minneapolis in 1976. His dissertation, The Structural Development of a Public Education System in the Virgin Islands, 1917-1970: A Functional Analysis in Historical Perspective. In addition, Turnbull pursued post-graduate studies at New York University.

From 1979 to 1987, Turnbull served as Commissioner of Education over St. Croix, St. Thomas, St. John, and Water Island. During his tenure, he increased cultural awareness by establishing the Cultural Education Division to promote historical knowledge and cultural understanding throughout the USVI and neighboring islands.

In 2011, the Legislature of the Virgin Islands honored Turnbull by naming a new public library in Estate Tutu, St. Thomas, “The Charles Wesley Turnbull Regional Public Library. In addition, he was awarded the Virgin Islands Medal of Honor, the Territory’s highest honor.

At the 51st Commencement of the University of the Virgin Islands in 2015, Dr. Charles Wesley Turnbull was awarded an Honorary Doctorate.