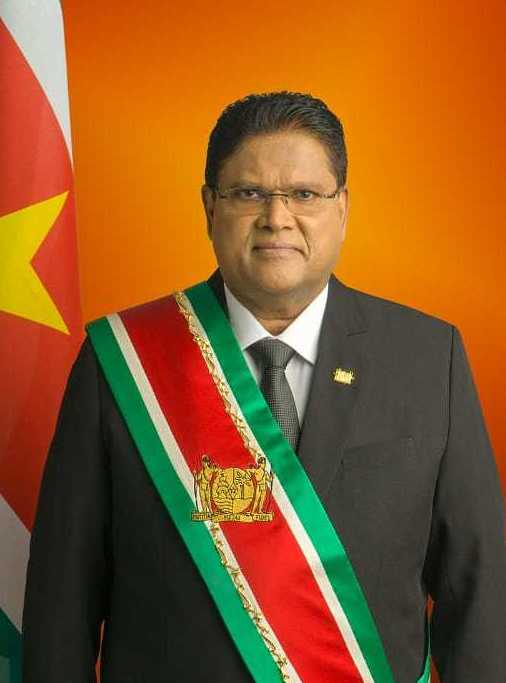 Politician Chandrikapersad “Chan” Santokhi, whose grandparents were taken to Surinam from Bihar, India, to work as indentured laborers during the 19th century, was born on February 3, 1959, in Lelydorp, Surinam. He is a member of the Progressive Reform Party, which was once an ethnic Hindustani party, that won 20 of the 51 seats in the National Assembly. He is the youngest in a family of nine children. His father was employed at the harbor of Paramaribo, the capital city, and his mother was a shop assistant in Lelydorp. Information regarding their names is not available.

In 1978 at the age of 19, Santokhi received a scholarship to study at the Nederlandse Politieacademie in Apeldoorn, Netherlands. He received a Bachelor of Science degree in Applied Research in 1982 and worked as Police Commissioner for Paramaribo. In 1989, he named the head of the national criminal investigation department, and two years later, in 1991, Santokhi was appointed chief commissioner of police for Surinam.

From 2005 to 2010, Santokhi was Minister of Justice and Police of the Republic of Surinam. He was elected as Chair of the CICAD, the autonomous body of the Organization of American States that coordinates the drug policy of the Western Hemisphere. He received the “Great Officer of the Yellow Star,” a state decoration, in 2010. The following year, 2011, he was elected Chairman of the ‘Vooruitstrevende Hervormings Partij, the Progressive Reform Party.

Chandrikapersad and Mellisa Kavitadevi Seenacherry, an attorney and Secretary of the Ministry of Justice and Police, were married in a Hindu ceremony on July 19, 2020. He is the father of four children, two from a previous marriage.

On July 16, 2020, Santokhi took the oath of office as President in Paramaribo in a ceremony without a public presence due to the COVID-19 pandemic, He had been elected President by acclamation in an uncontested election, thus being the 9th President of the Republic of Suriname. Santokhi replaced former president Dési Bouterse, who was found guilty of murdering trade union leaders and journalists in 2019 and smuggling more than a thousand pounds of cocaine through the country. During his inaugural address, Santokhi noted that he inherited the leadership of a nation on an economic precipice since the national treasury was empty due to the excessive debt accumulated by his predecessor.

Following a political philosophy patterned by the teachings of Mahatma Gandhi, Santokhi in January, 2021 was the chief international visitor at India’s Republic Day parade and principal speaker at the 16th virtual Pravasi Bharatiya Divas Convention in New Delhi on January 26. He called for visa-free travel between the two nations and the development of significant political and economic ties between Suriname and India.