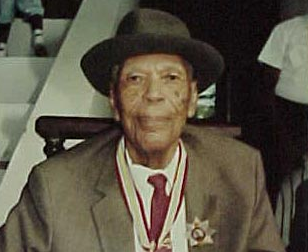 Vere Cornwall Bird, the first Prime Minister of Antigua and Barbuda, is a national hero of this Caribbean nation. Vere Cornwall Bird was born in New Street, St John’s, Antigua on December 7, 1910, the fourth child of Edghill and Theophilus Bird at a time when the two islands were colonies of Great Britain. He received his early education at St. John’s Boys’ School in St. Johns.

Bird was an officer in the Salvation Army for two years, mixing his interests in the union and in politics. He left the Salvation Army because he saw how the landowners treated the indigenous black Antiguans and Barbudans. In response, he became a political and labor activist. When the Antigua Trades and Labour Union (ATLU) was formed in 1939, Bird was a member of the executive committee. By 1943 he had become president of the union and led a struggle for better working conditions and higher wages against the white sugar barons. The union first entered politics in 1946 and Bird won a seat in the legislature in a by-election and was appointed a member of the Executive Council.

When universal adult suffrage was introduced in 1951, the ATLU, under the banner of the Antigua Labour Party, won all the seats in the legislature, a feat it repeated until 1967, making Antigua a country with a multi-party system but with a freely elected one-party rule. In 1956, the ministerial system was introduced and the governor gave Bird the portfolio of trade and production. When further constitutional progress was made in 1960, he was appointed Chief Minister. In 1967, Antigua became the first island in the Eastern Caribbean to receive its constitution from Britain, which provided for internal self-government, although London remained responsible for foreign affairs and defense.

Bird, a radical in his younger days, had moved to the right, especially in the face of severe social unrest that forced a split in the ATLU in 1967. Unrest the following year, 1968, resulted in the ATLU losing its firm hold on Antigua and Barbuda politics. The split gave rise to the Antigua Workers Union and later the Progressive Labour Movement (PLM). Bird decided to resign as he did not think it was right to hold positions in both the newly constituted union and the new political party.

In 1968, the PLM won four seats in a by-election and by 1971 Bird was no longer in power, having lost not only the government to the PLM but also his parliamentary seat, which he had held for 25 years. A former lieutenant, George Walter of the PLM, became the island’s new prime minister.

Bird’s political exile lasted five years. In 1976, he took over the government again, having opposed independence because Antigua was not, in his view, psychologically ready for it. He won the 1980 election again, this time with independence as one of the main campaign issues. With his powerful family, he ruled Antigua and Barbuda until 1994, when he retired from politics, paving the way for one of his sons, Lester, who became prime minister.

In 1985, Antigua International Airport was renamed V.C. Bird International Airport in his honor. In 1994, he was named the country’s first national hero and in November 1998, the people of Antigua and Barbuda honored him with the Order of the Knight. Vere Cornwall Bird died in St. John’s on June 28, 1999, at the age of 89.