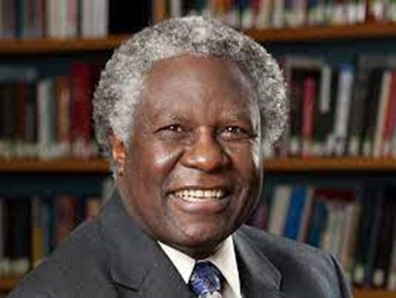 Calestous Juma was a Kenyan scientist and university scholar who primarily focused on sustainable development. He served as a Professor of the Practice of International Development and Director of the Science, Technology, and Globalization Project at the Harvard Kennedy School. Juma also served as the director for the Agricultural Innovation in Africa Project funded by the Bill and Melinda Gates Foundation. He was born in Busia village on June 9, 1953 to John Kwada Juma and Clementina Nabwire and grew up in Port Victoria, Kenya. Juma attended Port Victoria Secondary School and later Egoji Teachers’ Training College in Kenya in 1974. After his certification, Juma taught science in Mombasa, Kenya, and wrote for the Daily Nation newspaper. In 1978, he became the first full-time environment and science correspondent for the newspaper.

In 1979, Juma became a researcher and editor for Environment Liaison Centre, an NGO based in Nairobi, Kenya. He then enrolled at the University of Sussex in England with a full scholarship 1982, receiving an MSc in Science, Technology and Industrialization in 1983 and a DPhil in Science and Technology Policy in 1987.

Juma is considered a revolutionary figure in scientific research; he advocated for the use of technology and innovation for development. Juma established Africa’s first science policy think tank African Centre for Technology Studies (ACTS) in 1989. ACTS released a study called “Innovation and Sovereignty,” which helped with the creation of the first industrial property legislation in Kenya. At ACTS, he led a study called Economic Reform and Environment in Africa, which researched the connections between economic innovation, conservation management, and technological transformation in developing nations to further understand how socio-economic environments impact the integration of new technologies. This research was highlighted in some of his first works Long-Run Economics: An Evolutionary Approach to Economic Growth (London: Pinter, 1987) and The Gene Hunters: Biotechnology and the Scramble for Seeds (Princeton: Princeton University Press and Zed Books, 1989).

Juma moved to Montreal, Quebec Canada in 1995 to serve as the United Nations Convention on Biological Diversity first executive director. However, he left shortly afterwards because he felt the UN agency placed too many limitations on Africa’s ability to crop genetically modified foods. In 1998, Juma moved to Harvard to continue his work. There he created a UN task force that developed ways in which the developing world can attain Millennium Development Goals through technology and science. In addition, Juma in 2005, served at the US National Academy of Sciences as the Global Challenges and Biotechnology chair, and in 2012 served as co-chair of the African Union High-Level Panel on Modern Biotechnology. One of Juma’s last works, before he passed, was Innovation and Its Enemies: Why People Resist New Technologies, published by Oxford University Press in 2016.

Calestous Juma died on December 15, 2017 in Boston, Massachusetts at the age of 54. He is survived by his wife Alison Field-Juma, and his son Eric Juma.