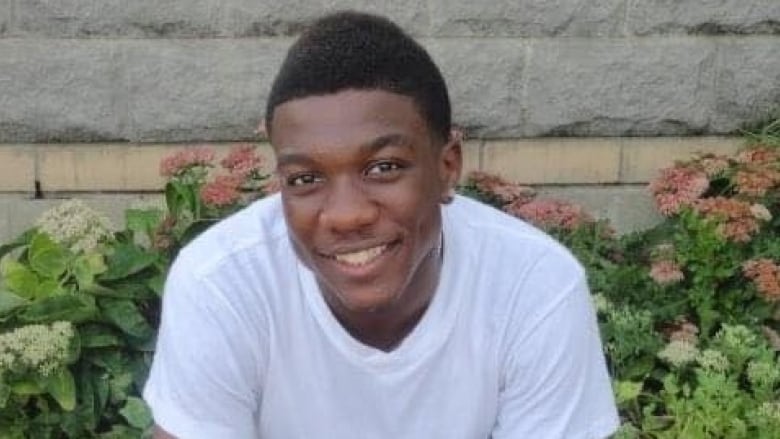 On May 5, 2020, 26-year-old Caleb Tubila Njoko fell from the 15th floor balcony of his mother’s London, Ontario, apartment building during a police intervention. He died in hospital three days later.

Born in Toronto to Francophone Congolese immigrants, Nelly Wendo and Guy Tubila, Caleb attended the Monseigneur-Bruyère Catholic High School in London where he distinguished himself in basketball. In the eight years since graduation, Caleb worked odd jobs at a factory and in fast food chains in Brampton and London. His dream to follow a career in music like his grandfather was disrupted by episodes of emotional instability and run-ins with the police. Finding himself homeless during the early months of the 2020 COVID-19 lockdown, Caleb moved into his mother’s apartment, a far-from-ideal arrangement for a young man who struggled with mental illness and was considered fragile by some.

On April 28, seven days before his fall from the balcony, Caleb was arrested after an altercation with the driver of a pizza truck. He was charged with alleged theft of a vehicle and obstruction. Three officers wrestled him to the ground and handcuffed him face down, an incident caught on camera and published in the online Franco-Ontarian news source ONFR+ that is strikingly similar to other images of black men being subdued by force. The three officers are all kneeling over him and appear to be applying pressure to his neck, back, and legs. The police reported that Caleb’s injuries were minor but they were serious enough for him to be sent to hospital in an ambulance.

Caleb’s parents told a different story about his injuries. His father told ONFR+ that his son lost a lot of blood. His mother described the damage to his face, cuts on his hands, oozing wounds, and a swollen neck. He was in so much pain that he could not eat on his own. He didn’t sleep for days, screamed, and threw things. Desperate to get him into a hospital where he could receive help, she called 911.

Two officers arrived. Once Caleb saw who they were, he barricaded himself inside the apartment and screamed in fear for them to go away. The officers attempted to break down the door with a battering ram and then, using a trained negotiator, spent a tense hour talking to Caleb through the door. Other officers surrounded the building from the outside. Mrs. Wendo was able to speak briefly with her son by phone. Then the line cut out and soon after she learned he had fallen from the balcony. He died 3 days later in hospital. Nelly Wendo told Global News that she strongly believes that her son’s April encounter with police contributed to his fall on May 5th and she holds the London Police responsible for his death.

The Special Investigations Unit (SIU) investigated Njoko’s death. The subject officer declined to be interviewed, as is her right under the Police Services Act, but she did provide her duty notes. In September 2020 the SIU cleared the officers, concluding that they had “not transgressed the limits of care” determined by criminal law.