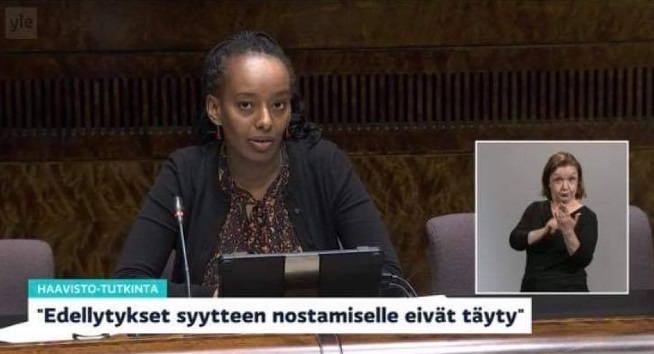 Bella Forsgrén is the first black woman elected to the Parliament of Finland. Born February 10, 1992, in Addis Ababa, the capital of Ethiopia, she was adopted at age 3 by a Finnish couple. Her official, legal name is Asha (meaning hope, given by her birth mother) Maria (given by adoptive parents) Belaynesh (given by orphanage staff member) Forsgrén (adoptive parents’ family name). She grew up in the village of Hietama, not far from the city of Äänekoski (population 18,700), where she learned to appreciate the natural environment. Five of the eight children of the Forsgrén family are adoptees (three from Ethiopia, two from South Africa).

Lacking clear direction in terms of career goals, after completing high school Forsgrén worked as a cashier and clothing salesperson. In 2011, she moved 50 kilometers (31 miles) south to attend the University of Jyväskylä where she majored in social policy, was quite active in student government, and headed the student union. Her social consciousness was further raised when she spent six months in Brazil as an exchange student.

Since her adolescent years Forsgrén has been attracted to Green League party politics. In her home region she became a provincial councilor, the Jyväskylä city councilor, and the parish councilor. When a member of Parliament who represented central Finland retired, Forsgrén suspended her academic work and took advantage of the opportunity to fill the vacancy. Having tallied 4,354 votes in the spring election, Forsgrén entered Parliament on April 17, 2019, its second youngest member and only the second Black woman ever to serve there. (A historical note: Jani Petteri Toivoli, born in Vaasa, Finland, to a Finnish woman and a Kenyan man, was elected to Parliament in 2011 and served two terms.)

In 2020, Forsgrén appeared in a BBC documentary that focused on women in the Finnish government and is one of the women featured in the FLE (Finnish Broadcasting Co.) “Finland is a Country” program. In an interview wherein women describe their treatment as politicians she admitted: “I must think at least twice about which discussions to take part (in because) it’s not always a matter of the subject – it’s a matter of how women or POC (people of color) are allowed to talk! Any criticism isn’t wanted.” The victim of racist verbal assaults herself, she also criticized Finnish lawmakers for not enacting strong measures to combat hate speech and online harassment.

Away from Parliament, Forsgrén lives with a roommate in Helsinki and thoroughly enjoys cooking for friends. She said she hopes to visit Ethiopia someday but does not feel compelled to track down her biological parents.