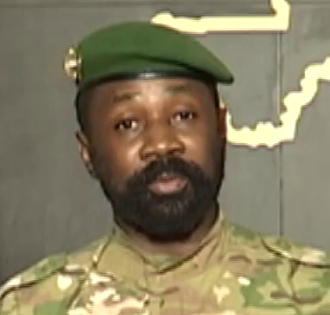 The current president of Mali is Assimi Goita. Goita is the son of a military officer and director of the military police who grew up in the military barracks near Bamako. As a child, he wanted to follow in his father’s footsteps and join the Malian military. He attended the Prytanee Militaire de Kati near Kati, Mali. This selective public school trains children up to the baccalaureate with the rank of sergeant. The school’s motto is “Learn to Serve” and has trained many officers in the Malian military.

In 2002 Goita was sent to the northern cities of Mali for training. He was then stationed in various Malian cities: Gao, Kidal, Timbuktu, Menak, and Tessalit. In 2008 he was a commander of troops in northern Mali where an Islamic insurgency had been brewing. He was also charged with neutralizing people traffickers (enslavers) and armed groups in the vast region. In 2012 a Tuareg rebellion broke out in northern Mali against the central government. Goita oversaw military actions during this short-lived rebellion. He earned numerous decorations and promotions while stationed in the northern regions. In 2015 the Ministry of Defense gave now Colonel Goita the responsibility of coordinating special operations against insurgents.

In July 2020 demonstrations protesting the government of President Ibrahim Babacar Keita broke out throughout the country. The protesters accused the government of corruption and failure to quell the armed rebellion in the north. On August 18, 2020, the Malian army launched a successful coup against Keita and his government. The coup leaders formed the National Committee for the Salvation of the People which was headed by Assimi Goita.

International reaction to the coup was negative. France along with other European and African states threatened economic sanctions against the new government unless civilian power was restored. On September 20, 2020, the coup leaders appointed civilians, Bah N’daw as President, and Moctar Ouane as Prime Minister. Goita was appointed vice-president. Goita was given the power to decide on ministerial positions in the new government. This allowed the military to virtually control the “civilian” government. Relations between the civilians and military became tense over the next few months. The Islamic insurgency in the north was raging. Thousands had been killed and tens of thousands displaced from their homes.

On May 24, 2021, the military acted again. N’daw and Ouane were arrested by the military. They later resigned their posts and were released from custody. Assimi Goita, one of the main coup leaders, was sworn in as interim president of Mali on June 7, 2021. According to some reports, Goita was incensed that N’daw and Ouane had not consulted him about an impending cabinet reshuffle which would have removed army officers from the positions of Minister of Defense and Minister of Security.

Most international reaction to the coup was negative. France demanded a return to civilian rule and later announced that French soldiers would be withdrawn from helping Malians fight the insurgents. However, Russia has stepped in to help Mali and as a result, the two nations have grown closer. It is believed that a Russian company, the Wagner Group, has a contract with the Malian government to provide mercenaries to assist with the fight against the insurgents.

Goita has promised elections in 2023.

On July 20, 2021, Goita survived an assassination attempt when an assailant attempted to stab him at the Great Mosque in Bamako. The assailant died in police custody.