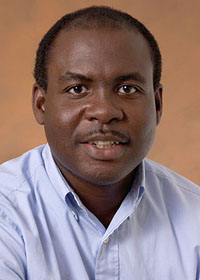 Dr. Ashitey Trebi-Ollennu is a robotics engineer at NASA, where he has served as the chief engineer and technical group leader for the Jet Propulsion Laboratory (JPL), which he joined in 1999. In addition to being a vital part of the JPL, Dr. Trebi-Ollennu was the lead engineer on the InSight Mission, the first deep interior mission on Mars, launched on May 5th, 2018.

Dr. Trebi-Ollennu was born in Accra, Ghana, and traveled to the United Kingdom, where he earned his bachelor’s degree in Avionic Engineering in 1991 from Queen Mary University of London. His lingering childhood fascination with planes encouraged him to continue his education at the School of Engineering and Applied Sciences, Royal Military College of Science, Cranfield University in 1996, where he received a Ph.D. in Control Systems Engineering. Dr. Trebi-Ollennu was most fascinated by the science behind replacing human pilots with robots, thus inspiring the 2018 InSight mission in which the robotic arm his team built would go where no human has ever gone before, exploring the frozen water of Mars and deducing how planets form. His past projects on Mars include the Phoenix Mars Exploration Rover in 2003, which resulted in the discovery of water on Mars. In 2007, he worked on the Mars Lander, earning the NASA Exceptional Engineering Achievement Medal in 2008 for his contributions, the 2011 Mars Science Laboratory, and the InSight Mars Lander project in 2016.

Dr. Trebi-Ollennu is a fellow at the Institute of Engineering and Technology, the Royal Aeronautical Society, and the Ghana Academy of Arts and Sciences. His research at these institutes and at NASA focuses on planetary rovers and their operations, mechatronics, reconfigurable robots, and man-machine interactions.

In 2011, Dr. Trebi-Ollennu founded a non-profit organization called the Ghana Robotics Academy Foundation with the vision of inspiring young Ghanaians in STEM. The organization works to motivate the next generation by facilitating robotics and science clubs in public and private schools, organizing yearly workshops and competitions, and advocating for robotics programs to be a regular part of the school curricula. With over ninety-five publications, Dr. Trebi-Ollennu is a highly accomplished engineer who has changed the field of STEM on an astronomical level, which has earned him several awards such as the IEEE Region 6 Outstanding Engineer Award in 2007, the 2010 Specialist Silver Award from the Royal Aeronautical Society, and the 21st Century Trailblazer Award in Systems Engineering from the U.S.A. National Society of Black Engineers.