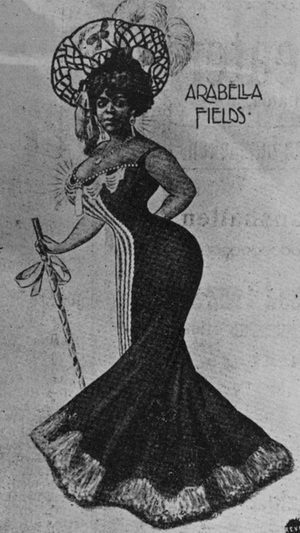 Arabella Fields was a singer and actress known as “The Black Nightingale” and had a storied career performing in Europe. She was born on January 31, 1879, as Sarah Arabella Middleton in Philadelphia, Pennsylvania. Early reports state she was performing at the young age of eight. Middleton had a rich contralto singing voice, and with her caramel-colored skin tone, often presented herself throughout her career as African, Indian, Red Indian, American, South American, German African, and even Australian.

There are few details about her youth, but Middleton joined a vaudeville troupe called The San Francisco Minstrels, that began touring Europe in 1894. The group consisted of four men and four women and began their tour in the Charlottenburg Flora cabaret in Berlin, Germany. They spent three months touring through Denmark, Norway, Sweden, and Finland. During this time, Middleton changed her stage attire to German, wearing Tyrolean clothes to attract a larger German crowd. She also married fellow troupe member James C. Fields, who was 34 years old, while Middleton was just 15. The troupe fell apart in 1897, and the couple formed the ‘James and Bella’ duo and toured across Austria-Hungary and Russia. They changed their name to The American Jubilee Troubadours in 1900, and performed throughout the United Kingdom, France, and the Netherlands.

Newspapers around the globe began to advertise Fields as the “The Black Nightingale” and in 1902, she left her husband and began working in cabarets and theaters around the German Reich. Around 1904, Fields met pianist Engelhardt Albert Georg Winter, and the two married and had one child. She did not take her new husbands last name, as was customary of the era. Through her travels, Fields became fluent in German, Russian, French, and Dutch, and began to perform traditional Lieder songs in each language over the next three years. In 1907, Fields traveled to Berlin to records several songs for the Anker Company, and also appeared in three short silent films: The Whistling Bowery Boy, Hello, My Baby, and The Song That Reached My Heart. These films have since been lost to time.

Fields embarked on a three-year tour in 1908, which began in Italy, and included Germany, Denmark, Hungary, Austria, Sicily (Italy), Romania, Switzerland, and Russia. In 1910, Fields appeared at Gartenbau Theater, a popular spot in Vienna, where she performed “Nach Zigeuner Art,” a song written for her by composer Theodor Wottiz. After returning home to Hamburg, Germany in 1915, Fields and her husband relocated to Amsterdam, Netherlands where they lived through World War I. In 1920 they returned to Germany.

Fields and Winter separated in 1921 she began touring with bandleader Sam Wooding in his ‘Chocolate Kiddies’ revue, crossing through Germany, Denmark, and Czechoslovakia, Sweden, Norway, France, Spain, and the newly formed Soviet Union (formerly the Russian Empire). She then worked with dancer Louis Douglas and his ‘Black Follies’ revue touring Germany and Poland. Fields eventually toured with Douglas in Egypt and Syria. She retired from singing in 1931. She appeared in Irish director Rex Ingram’s last movie, Baroud, filmed in Marrakech, Morocco and Nice, France. Fields died in Hamburg, Germany in 1933 at the age of 54.