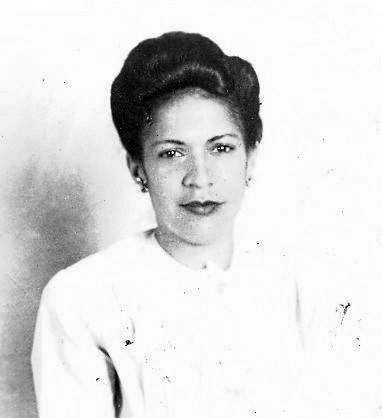 Aida Cartagena was a prominent Afro-Latina poet, novelist, scholar, and public intellectual. She was born in Moca, Dominican Republic on June 18, 1918, and died at the age of seventy-five on June 3, 1994. Aida was the daughter of Olimpia Portalatin and Felipe Cartagena Estrella. She never married or had any children. Cartagena was a major proponent of the Negritude Movement in the Spanish-speaking world. The Negritude Movement was an anti-colonial cultural and political struggle founded by African and Caribbean students in Paris in the 1930s. It sought to reclaim the inherent value of blackness and African culture.

Professor Cartagena was an early member of La Poesia Sorprendida (1943-1947, Surprised Poetry), an internationally well-known avant-garde literary journal. Based in the Dominican Republic, the journal published short stories, essays, and artwork from throughout but not exclusively, Latin America. Although the journal survived only four years, it was exceptional in being allowed to operate under the oppressive dictatorship of Rafael Trujillo (1930-1961). La Poesia Sorprendida published Aida Cartagena’s works and gave her exposure as a writer to the international community.

The life, education, and emphasis on a public career that we see in Aida’s example was unusual for her time and place. Cartagena attended the Universidad Autonoma de Santo Domingo (the Autonomous University of Santo Domingo, AUSD), where she earned a doctorate in the humanities, and she attended the Ecole du Louve in Paris for postgraduate studies with an emphasis in museology and the fine arts. In her final published interview, Aida Cartagena described how her mother was more traditional about her gender expectations for her daughter, including her worry concerning all her daughter’s international travel, but that her father was “very liberal” and supportive of Aida’s goals. One can see the influence of extensive international travel on Aida’s work. In perhaps her most renowned novel, Escalera para Electra, the emphasis on the universal intertwined with the local (her “pueblo” or the Dominican Republic) shines throughout the book.

The extensive travel Aida experienced in life shaped her mind and soul in numerous ways. She moved in cosmopolitan circles and counted some of the most famous Latin American intellectuals and writers of the twentieth century as her friends. Cartagena credited travel and her relationships, more than books, as the key to her education and development as a writer. She said, “I don’t think a poet is born, the poet is made.” In her later life, she served as a representative for the Dominican Republic at UNESCO, she worked as a professor of art history and archaeology at AUSD, and she was the director of the anthropology museum.