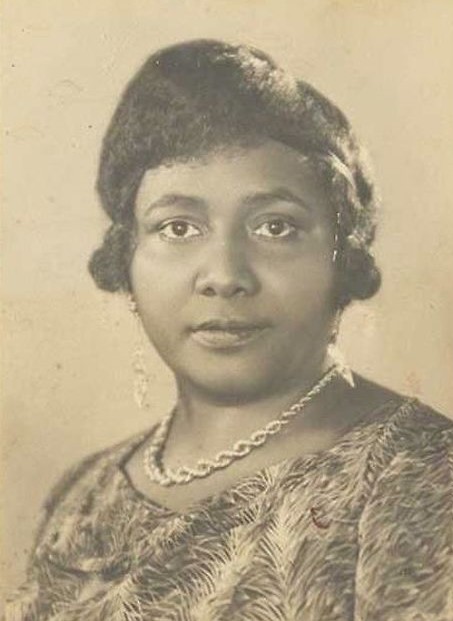 Paulette Nardal was one of the founders of the Negritude intellectual movement. Nardal was born on October 12, 1896 in Saint-Pierre, Martinique, to Paul Nardal, the first black engineer in public works on the island, and Louise (Achille) Nardal. Paulette was the eldest of seven sisters.

After her studies in Martinique, Paulette arrived in Paris (France) in 1920 and became the first Black student from Martinique at La Sorbonne University. As a student, Paulette Nardal regularly attended Le Bal Nègre, a dancing and jazz club where black people gathered which allowed her to remain connected to both the Black Diaspora and Africa.  At the end of her studies, Paulette Nardal presented a dissertation on Harriet Beecher Stowe, who wrote Uncle Tom’s Cabin. This work introduced her to the intellectual struggle of black people in the United States.

Paulette was later joined later in Paris by her sisters Jane and Andrée. Jane (or Jeanne) Nardal, was the fourth among the seven sisters.  She studied literature at La Sorbonne University, was interested in Negro Spiritual songs and contributed to their spread in Martinique. Andrée was also interested in music and was a pianist.

In 1929, the three Nardal sisters opened a Paris salon called Le Salon de Clamart. This salon was also a gathering place where black intellectuals met, networked, and reflected on black peoples’ condition, which was dominated at that time by colonialism in Africa and racial discrimination in the United States and the West Indies.

Jean-Price Mars, René Maran, Marian Anderson, and Marcus Garvey were among the many black intellectuals and artists who visited the salon. The visitors also included Aimé Césaire, Léopold Sédar Senghor, and Léon Gontran Damas, who are considered the founders of the Negritude movement.  Historians now however credit Le Salon de Clamart as creating the intellectual environment that produced the major ideas related to the concept of Negritude and the subsequent Negritude movement. The Nardal sisters, for example, used the salon to create the intellectual review journal La revue du monde noir (The Review of the Black World). Although the review lasted only one year, Paulette became known for her articles, which explored the condition of black women throughout the diaspora.

Paulette was crippled at the beginning of World War II in 1941 when the ship she was traveling on from Martinique to France was attacked by a German warship. During the war, she actively participated in the French resistance to German occupation.  She also created another salon as well as the feminist intellectual review La femme dans la cité (The Woman in the City).

In the post-World War II period, Paulette Nadal was nominated as a delegate to the United Nations in 1946.  She worked in the Division of Non-Self Governing Territories. She returned to Martinique in 1948, and in the 1950s and 1960s, she supported Dr. Martin Luther King’s campaign for civil rights in the United States.  Paulette Nadal, who never married, died in Fort-de-France, Martinique on February 16, 1985. She was 88.