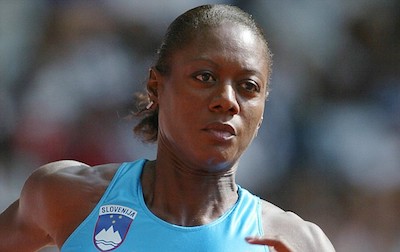 Born on May 10, 1960, in Cold Spring, Hanover, Jamaica, Merlene was the fourth of seven children of Hubert Ottey, a farmer, and his wife Joan, a midwife. Both had been talented runners in their youth. As early as age fourteen, Merlene was already making her mark in local meets, running her first races barefoot. Convinced of Merlene’s potential, Joan Ottey journeyed with her to a track meet in the capital, Kingston, in an attempt to have her selected to represent Jamaica at an overseas meet. Not being familiar with Kingston, and having no friends or relatives with whom they could stay overnight, mother and daughter slept at a police station. She competed the next day, winning gold medals in sprints and the 4×100-meter relay.

In 1979 Ottey moved to the U.S. and attended the University of Nebraska where she joined the track team. During her time in the United States, she was briefly married to American track athlete Nat Paige. She represented Jamaica in the 1979 Pan American Games, winning bronze in the 200 meters.  In the 1980 Moscow Games, Ottey became the first female English-speaking Caribbean athlete to win an Olympic medal when she took the bronze. Back in Jamaica, she was awarded the National Honour of Officer of the Order of Nation, and the Order of Distinction.

In 1998 Ottey moved to Slovenia. Initially, she continued to represent Jamaica. However, in May 2002, she became a Slovene citizen, representing her new country in international events.

Ottey competed for Slovenia in the 100 metres at the 2004 Summer Olympics where she reached the semi-finals. At age forty-six, she competed in the 2006 European Championships.  She finished fifth in the semi-finals of the 100 meters .At age forty-eight, Ottey failed by 0.28 seconds to reach her eighth Olympic Games in 2008. Two years later, however, she qualified for Slovenia’s 4×100-meter relay squad at the 2010 European Athletics Championships where at age fifty, she became the oldest athlete ever to participate in that event.  Two years later, Ottey competed in the 4×100 meter relay at the 2012 European Athletics Championships.

Ottey, one of the most decorated female sprinters whose nine medals are the most by an individual, never won that elusive individual gold medal over the seven Olympic Games in which she participated.