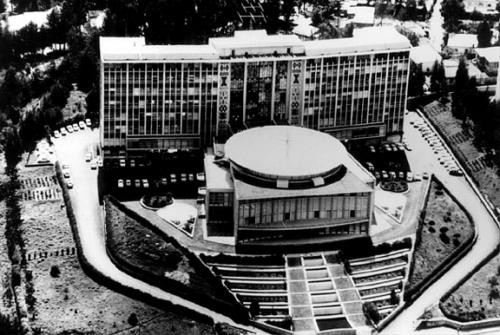 The Organization of African Unity (OAU, 1963-2002) was an alliance of independent African nations working to enhance cooperation between the newly decolonized African governments. The alliance had its basis in the Pan-Africanist philosophy encouraging the unity of all peoples of African ancestry, but it also was inspired by ongoing independence struggles as various African nations freed themselves from European colonial rule in the early 1960s.

On May 25, 1963, Ethiopian Emperor Haile Selassie invited the heads of the 32 independent African nations at the time to convene at his country’s capital, Addis Ababa. The result of this conference was the formation of the OAU, which would grow in membership to include 54 of the 55 African states as members.  Morocco was the only state to decline membership.

The OAU’s basic principles included promotion of solidarity among African states, improved quality of life for Africans, a promise to defend the sovereignty of African states, and eradication of colonialism in all its forms. The OAU hoped to achieve these goals through cooperation and peaceful negotiation between its members.

The OAU established various working groups, including the Commission of Mediation, Conciliation and Arbitration, which was designed to aid with the peaceful settlement of disputes between members.  The OAU also helped to finance independence movements in those nations still under European rule, thus playing an instrumental role in independence for such states as Zimbabwe in 1980. The OAU further was committed to battling apartheid and white minority rule in states such as South Africa, which joined the organization in 1994.

Ideological differences between the member states often made agreement on a single course of action difficult.  The absence of an armed force similar to the United Nations’ peacekeeping contingents left the organization with no means to enforce its edicts.  And its unwillingness to intervene in the internal affairs of member nations often meant it would not confront brutal dictatorships such as Idi Amin‘s regime in Uganda or domestic crises such as the Rwandan Genocide, prompting some observers to criticize the OAU as a forum for rhetoric rather than action.

Recognizing many of these shortcomings, the OAU in September 1999 issued the Sirte Declaration, calling for a new body to take its place.  On July 9, 2002, this proposal was fulfilled with the creation of the African Union (2002-    ), which continues to this day to uphold many of the founding principles of the OAU.