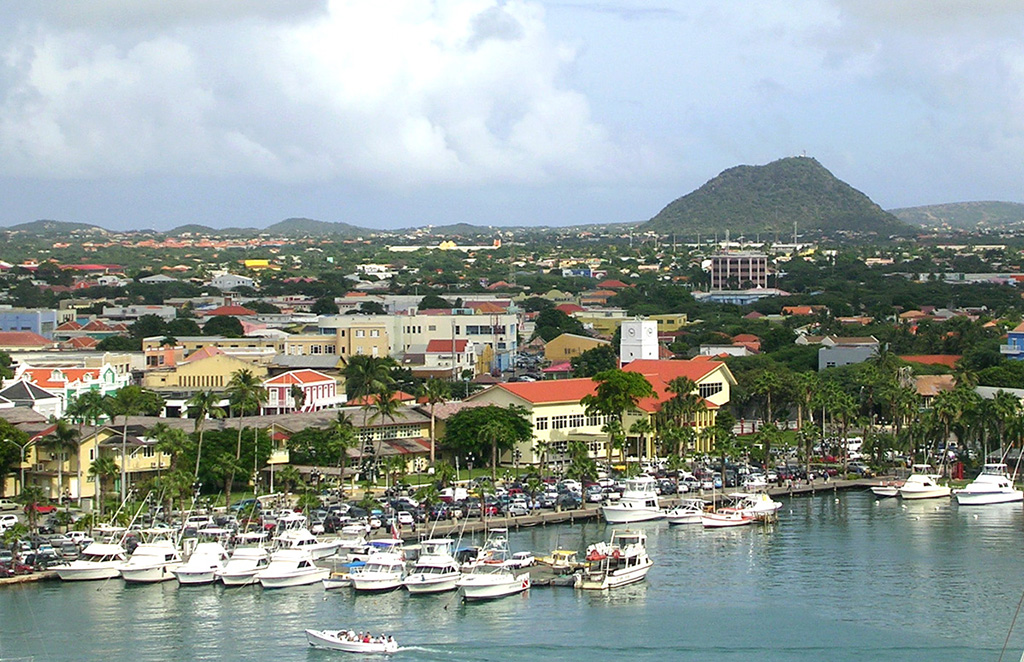 Oranjestad (literally Orange Town in Dutch) is the capital and chief administrative center of Aruba, a Caribbean nation that is located in the West Indies which remains under the jurisdiction of Netherlands. The town had a population of 29,998 people in 2010. Oranjestad is located on the western coast of the island on an enclosed harbor which is large enough to handle modern cargo ships and oil fueling and drilling equipment.  The town’s major industries, besides tourism, are petroleum processing and trans-Atlantic shipping. Oranjestad is well known for its brightly colored buildings, admirable residential districts, and a modern sports area named Wilhelmina Stadium.

The history of Oranjestad began well before the first European arrived to colonize the land. The area that would later become Oranjestad was originally settled by Arawak Indians who had traveled north from their settlements on the South American mainland. The Arawaks flourished in the area for around 1,500 years.

Spanish explorers began to arrive in the area at the beginning of the 16th century. Alonso de Ojeda was the first Spaniard to reach the island and originally named it Oro Hubo, due to the gold that he had found there. After a short period of exploration the Spanish moved on to other Caribbean islands they felt contained more natural resources to exploit.

By the mid-17th century the Dutch arrived and colonized the area around modern Oranjestad. The area was initially called the Bay of Horses because settlers captured wild horses on the island and sold them to the larger and wealthier Dutch colony of Curacao.  Fort Zoutman was built in 1796 partly to protect the Dutch settlement from nearby pirates as well as the British and French who were also active in the Caribbean. By the mid-1820s Dutch colonial leaders named the settlement Oranjestad after the first King Willem van Oranje-Nassau.  Naming the town also reflected renewed interest in Aruba due to the second discovery of gold in the area. In the mid-20th century the discovery of oil brought a third economic boom to Oranjestad.

The people of Oranjestad, like Aruba, more generally, are mostly ethnically mixed.  They are often of Arawak ancestry in combination with Dutch, Spanish, and African ancestry.  Unlike most Caribbean islands, however, Aruba had few slave-based plantations and thus people of predominantly African descent form a small part of the population.

The sights and sounds around Oranjestad have been shaped by the town’s culture and history. Fort Zoutman, Aruba’s oldest building, dating back to 1796, remains a tourist destination as does the Willem III Tower, built in 1868 as a lighthouse and public clock tower. Situated between those buildings is the Historical Museum which tells the island’s European past while the Archeological Museum showcases Aruba’s Amerindian cultural heritage. Monuments to important colonial political leaders such as Jan Hendrik Albert Eman, Cornelis Albert Eman, and Betico Croes can be found near the Parliament building. Restored landmark buildings can be found throughout the city. The Bon Bini festival that takes place every Tuesday at 6:30 p.m. showcases the island’s history and tradition.