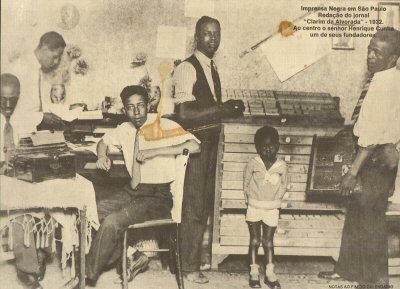 O Clarim da Alvorada (or Clarim d’Alvorada, the clarion of dawn) was a pioneer Afro–Brazilian newspaper established in 1924 and was key in strengthening the incipient black culture movement in the country. Part of a larger black press movement in the city of São Paulo, from about 1915, beginning with the publication of O Menelick and continuing to 1963 when Correio d’Ebano closed its doors, O Clarim helped to forge a greater sense of solidarity among Afro-Brazilians, thereby allowing the fight for fuller participation in society to reach a larger audience. In addition, organizational skills acquired with the establishment of the paper were fundamental for advancing other black movements in the country.

Afro-Brazilians were an important presence in the state of São Paulo’s economy as slaves in coffee plantations. Following the abolition of slavery in 1888, subsidized European immigration proceeded in large numbers, leaving the freed slaves with few economic options. Concentrating in the city of São Paulo, Afro-Brazilians began organizing around Catholic Brotherhoods and other social organizations including samba groups and women’s clubs. Small newspapers advertised their activities. A larger, more critical press, however, emerged in the 1920s, together with a sentiment in the country that Brazil needed a new direction: a more urban, industrialized, and nationalistic one.

Co-founded by Jaime de Aguiar (young aspiring poet) and José Correia Leite, both in their early twenties, and conceived initially as a literary publication, O Clarim became a vehicle for social criticism and the fight for better living conditions for blacks in Brazil. Focusing on Afro-Brazilian history, its legacy to the country and black unity, the paper was instrumental in politicizing a young Afro-Brazilian middle class, thereby sowing the seeds for other political organizations to flourish (such as Palmares civic center). In the later 1930s, O Clarim also discussed international relations, after the Brazilian visit of Robert Abbott, publisher of the Chicago Defender in 1923.  Afro-Brazilians were also influenced by the ideas of Marcus Garvey and the Universal Negro Improvement Association which by the late 1920s circulated more broadly in the country.

Clarim co-founder Leite in particular, always mindful of the importance of political mobilization, organized a Congress of Black Youth, seeking to further advance black unity. Even if the Congress was short-lived (1929-1930), the foundations planted by Clarim enabled the formation, in 1931, of Frente Negra Brasileira, the first national Afro-Brazilian political organization and, later, a political party.