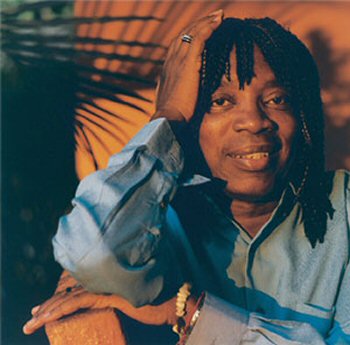 Milton Nascimento, famous Brazilian singer and composer, was born in October 26, 1942 in Rio de Janeiro, Brazil. After the death of his biological mother, Maria do Carmo Nascimento, Milton Nascimento moved with his adoptive family, Lilia Silva Campos and Josino Brito Campos, to the state of Minas Gerais, Brazil. Milton Nascimento’s career included collaboration with the exponents of Brazilian popular, jazz, and reggae music. He also played with foremost musicians in Europe and the United States.

In the early 1960s, a young Milton Nascimento was active in the music scene of Minas Gerais, collaborating with Brazilian musicians Fernando Brandt, Wagner Tiso and others. However, in 1966 through participation in the televised National Music Festival (Festival Nacional de Música Popular), he reached a broader audience. In the same year, Elis Regina, prominent Brazilian singer, recorded his song Canção do Sal (Salt Song), projecting his name in the music world.

Throughout the 1970s, Milton Nascimento recorded prolifically and participated in various song festivals in Brazil. His group, Clube da Esquina (Corner Club), popularized by the 1972 LP of the same name, reached an international audience. A fertile artist, some of Milton Nascimento’s international partnerships included participation by saxophonist Wayne Shorter and pianist Herbie Hancock in his 1975 and 1976 albums. Some of his most famous songs, such as Coração de Estudante (student heart), Travessia (bridge), and Canção da América (America’s song) recounted social and political struggles in a poetical language and invited Brazil to reflect on its course, particularly during the military regime, which seized power in 1964.

Milton Nascimento’s work included compositions for movies and the theater. Ever present at the international music scene, in 1996 he toured the United States with the show Amigo (friend), accompanied by the New York Philharmonic Orchestra.  Afterwards he performed at the Montreaux Festival, in Switzerland and the Tubingen Festival, in Germany. He closed this season at the Royal Albert Hall, in London, UK, with the Royal Philharmonic Concert Orchestra. In 2000, Nascimento won a Grammy for best Contemporary Pop Album (for 1999), at the first Latin Grammy Awards.  In 2003 and 2004 he won best Brazilian song honors (Portuguese Language). Nascimento lives in Rio de Janeiro.