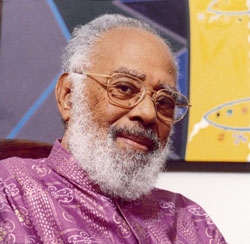 Abdias do Nascimento
Fair use image

Abdias do Nascimento, famous Brazilian writer, scholar, and politician, was born on March 14, 1914, in the state of São Paulo, Brazil. From a humble family, his mother, Josina, was a candy maker and his father, Bem-Bem, was a musician and shoemaker, Abdias do Nascimento joined the Brazilian Army at age 15, moving to the state capital, São Paulo, where he became politically active. In Rio de Janeiro, he founded, in 1944, the Teatro Nacional do Negro (Black National Theater). A member of Brazil’s Congress from 1983 to 1987 and a Senator in 1991, 1996-1999, Abdias do Nascimento dedicated his life to fighting racial prejudice.

In the 1930s, rising nationalism, gradual industrialization, and urbanization led to political transformations in Brazil, including the formation of a black press and the first Afro-Brazilian organized political movement, Frente Negra Brasileira. After participating in the latter, Abdias found in 1944 Teatro Nacional do Negro, focusing on black identity and heritage in Brazil, using art to promote education (through literacy classes) and to fight for social justice. The Teatro also staged poetry readings, including Langston Hughes’ Always the Same, revealing Abdias do Nascimento’s cosmopolitanism. Despite many problems, including internal divisions, lack of funds and support in general, the Teatro survived until 1968, when increased censorship after the 1964 military coup made it impossible to operate and Abdias do Nascimento went into self exile in the United States and Europe.

In 1970, Abdias do Nascimento became a full Professor at the State University of New York, Buffalo, founding the Chair on African Cultures in the New World at the Center for Puerto-Rican studies. He also taught in Nigeria, at the University of Ife, in 1976. Returning to Brazil, in the 1980s, he participated in the formation of the political party Partido Democrata Trabalhista (Democratic Labor Party) and was elected to Congress in 1983 on a platform of promoting Afro-Brazilian rights. As a senator (1991, 1996-1999), he continued this work and, in 1999, he was the first to head the recently established Rio de Janeiro Department for Citizenship and Human Rights. He received, in 2004, the Presidential recognition as “the greatest Brazilian political figure in the fight for black rights and against racism, prejudice and discrimination.” Abdias do Nascimento saw and shaped the emergence of the modern black movement in Brazil and his life was wholly dedicated to racial struggle in the country.