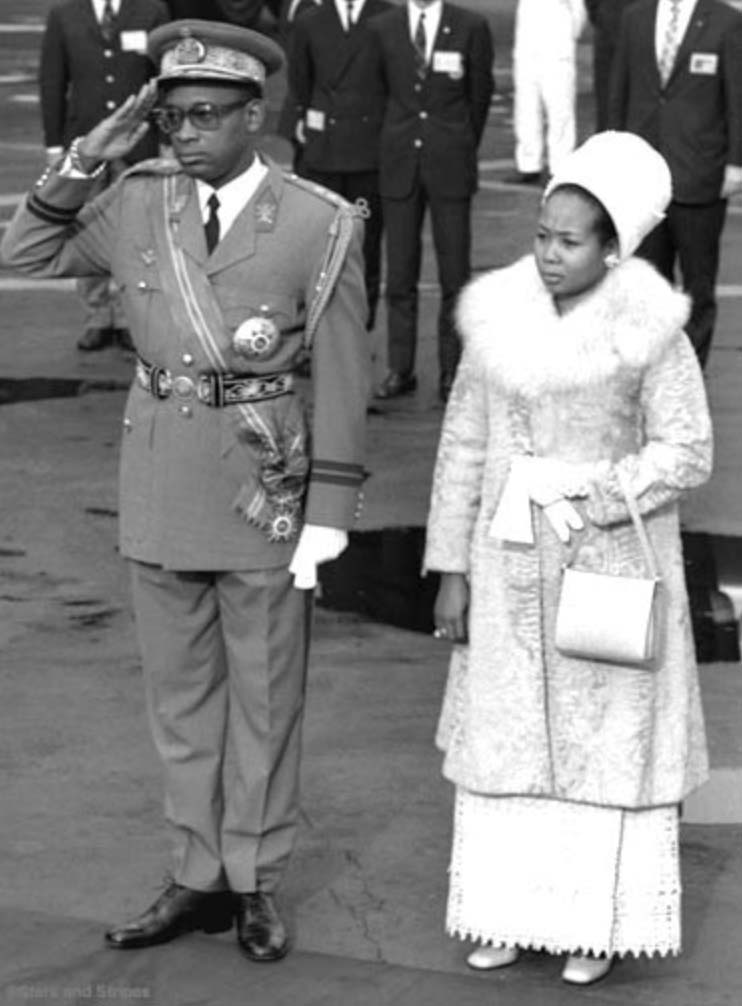 Joseph Mobutu, named Joseph-Désiré Mobutu at birth, was the second president of Zaire (now called the Democratic Republic of Congo) from 1965 to 1997.  Mobutu was born in 1930 in the Belgian Congo and studied journalism.

In 1958, Mobutu became the country’s state secretary and then was named chief of staff of the Congolese Army by Prime Minister Patrice Lumumba and President Joseph Kasavubu when the country gained independence from Belgium in 1960.  A year later, Mobutu helped President Kasavubu oust Lumumba.  Mobutu became the new prime minister.  In 1965, Mobutu exiled Kasavubu in a military coup and announced himself president, forming a one-party state around his Mouvement Populaire de la Revolution (MPR).

With support from the United States and other western powers because of his staunch anti-Communist stance, Mobutu became the unchallenged leader of the Congo, ruling the country for the next 32 years. In 1971, Mobutu changed the country’s name to Zaire and forced all citizens to adopt more African-sounding names. He himself changed his name to Mobutu Sese Seko Kuku Ngbedu Waza Banga.  Mobutu argued that the name change of all of Zaire’s citizens allowed the people to feel a sense of sovereignty and identification with African culture, especially after years of colonial rule.  The act also helped legitimize Mobutu as an authoritarian dictator.

As President, Mobutu lived luxuriously with numerous palaces and foreign cars while the vast majority of Zaire’s population lived in poverty.  As Mobutu amassed a personal fortune under his kleptocracy, the country’s economy virtually collapsed. In 1990 under growing internal and international pressure, Mobutu ended his formal dictatorship.  He allowed national political parties to re-emerge while still manipulating local and national elections to keep himself and his supporters in power.

By 1994, Mobutu’s presidency was under threat when Rwandan rebels infiltrated and terrorized Rwandan genocide refugees that had fled into the eastern provinces of Zaire.  Rebel activity encouraged indigenous insurgents to challenge Mobutu’s power.  Two years later, Mobutu was diagnosed with prostate cancer and neglected many of his political duties, spending most of his time overseas as he underwent treatment.  In 1997, rebel insurgent Laurent-Désiré Kabila overthrew the Mobutu regime.  Kabila renamed the country as the Democratic Republic of the Congo.  The banished Joseph-Désiré Mobutu died from prostate cancer on September 7, 1997, in Morocco.