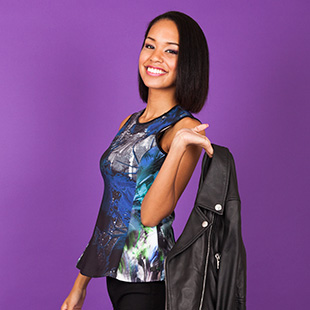 On March 12, 2015, Ariana Miyamoto became the first Miss Universe Japan of mixed-race descent. The beauty queen was born on May 12, 1994, the product of a brief marriage between an African American serviceman and a Japanese woman. Shortly after her birth, her father returned to America and she was raised by her mother’s side of the family in the southern port city of Sasebo, Japan.

Miyamoto and others of half-Japanese descent are commonly referred to as “hafus.” Because Japan is one of the most homogenous countries in the world, mixed-race people often encounter stigmatism. Miyamoto, for example, endured racism all throughout her childhood.  Some children refused to touch her, fearing that her black skin would “rub off” on them. Others mocked her, calling her “kurombo”-a derogatory term for people of color.

At the age of 13, Miyamoto moved to Jacksonville, Arkansas to live with her father and learned more about her African American heritage. For the first time, she was surrounded by people who shared her skin color, but due to her limited English and Japanese mannerisms, she still had difficulty adjusting to her new home. She spent two years in Arkansas and started high school there, but never graduated. Missing her home country, Miyamoto returned to Japan and worked as a bartender for a short period of time.

The current Miss Japan has a wide variety of interests including volleyball, cooking, and motorcycle riding. She has her motorcycle license and hopes one day to be the owner of a Harley Davidson motorcycle. The multi-talented Miyamoto is a 5th degree Japanese calligraphy master, meaning that she is proficient in the ancient art of calligraphy.

In 2014, a close friend of Miyamoto’s committed suicide in part due to the racism he faced as a half-white, half-Japanese boy growing up in Japan. The tragic loss of her friend spurred the 21 year-old Miyamoto to enter the Miss Universe competition to confront Japanese racial stereotypes.

Like other beauty queens of African descent such as Denny Mendez who became Miss Italy in 1996, and Lola Odusoga who became Miss Finland the same year, Miyamoto’s crowning has been controversial. Despite the international attention she has received, her reign has been almost completely ignored by the Japanese media, She has also been criticized by many Japanese individuals and organizations. Online commentators, for example, stated that she is not “Japanese enough,” does not have a “real Japanese face,” and is unfit to represent Japan. Miyamoto responded to her critics by arguing that her becoming Miss Japan is a specific challenge to that stereotype.  The 5’8” beauty believes that her Miss Universe Japan victory is a sign of racial progress and will help start a much-needed dialogue on what it means to be Japanese.

Miyamoto is currently trying to become a model and hopes to earn enough money to go to college in the United States. She is set to compete for the Miss Universe crown in January of 2016.