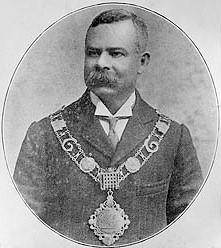 Allan Glaisyer Minns, an early black physician and civic leader, was the first elected mayorof African-descent in Great Britain.  Minns was born on October 19, 1858 on Inagua island, Bahamas to John Minns and Ophelia Elizabeth Bunch. His paternal grandfather, also named John Minns, emigrated from England to the Bahamas in 1801 and became a planter and slaveowner.  He formed a relationship with one of his female slaves, Rosette, and freed her in 1808.  The interracial union produced a number of enslaved children whom Minns later manumitted including his son John Minns, Allan’s father.

Allan Minns received an early education at the Nassau Grammar School for boys and upon completion moved to London, England to study medicine at St. Guy’s Hospital.  His access to education allowed him to benefit from and navigate through Victorian society. After registering with the British Medical Association in 1884, Minns moved to Thetford a year later to assist his brother Pembroke Robert Bunch Minns, a practicing physician. In 1888, in Sheffield, Minns married his first wife Emily Pearson, who died four years later.  He met the daughter of a Sheffield physician, Gertrude Morton, and the two wedded in 1896.

Minns set up his own medical practice in 1888 at Alexandra House on White Hart Street, and then later moved the business to Bridge Street in Thetford. For more than 25 years, he had a career as a well-respected physician and community leader. In the 1890s, he became the Medical Officer at Thetford Workhouse and an Honorary Medical Officer at the Thetford Cottage Hospital.

Outside of his medical practice, Minns was involved in many local civic and political groups including serving as president of the Thetford Horticultural. As a health advocate, he promoted healthy living through environment changes such as improving sanitation. Based on his environmental interests and research, he published “Fresh Air & Common Sense.”

Minns’ involvement in local politics made him a fixture within conservative political circles. He was a very active member of the Working Men’s Conservative Association. In 1903, he became the first person from the Caribbean to assume a position on the Thetford town council.  A year later, he was unanimously voted to be mayor of Thetford, becoming the first black mayor to be elected in the history of Great Britain.  Until recently, historians widely believed that John Archer, who was elected mayor of Battersea in 1913, was the first black mayor of Britain. However, a discovery of evidence published in the American Negro Year Book in 1914 documented Minns as the first black British mayor.

Minns served two one-year terms as mayor of Thetford from 1904 to 1906. During his tenure, he addressed issues that ranged from horticulture to capital punishment and oversaw improvements in the town’s services.  After two years, he stepped down in 1906, and continued to serve in public office. He remained on the council for many years, serving as deputy-mayor, and was appointed as Chief Magistrate of the borough.  He left Thetford in 1923 and moved to Dorking, Surrey.