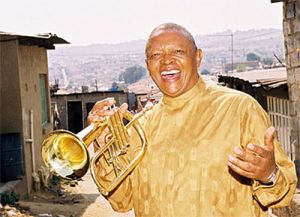 As one of the most popular and influential jazz musicians from Africa, Hugh Masekela’s life reflects the creative ways of using music to confront injustices and generate change in his homeland.  Born in the coal-mining town of Witbank (near Johannesburg), South Africa on April 4, 1939, Masekela attended mission schools.  During a visit to Masekela’s high school anti-apartheid activist and British Anglican priest Father Trevor Huddleston gave him a trumpet.  Shortly thereafter, Masekela began to take his first trumpet lessons from the band leader of the Johannesburg Native Municipal Band and later from saxophonist Kippie Moeketsi.  While receiving lessons from Moeketsi, he met trombonist Jonas Gwanga and Dollar Brand, whose musical combination of church music, African popular music, and American jazz captivated Masekela.  After listening to Duke Ellington, Count Basie, Charlie Parker, and others, Masekela chose to blend these styles with the traditional African rhythms and melodies he knew.  Together with Gwanga and Brand, they formed the Jazz Epistles and in 1959 became the first black band in South Africa to record a jazz LP.  Their success was compromised by the South African political situation; gatherings of black Africans larger than 10 people were banned, effectively prohibiting African musical performances, creating a prohibition of musical performances.

In 1960, Masekela went to London to attend the Guildhall School of Music for a few months.  From there, he traveled to New York to attend the Manhattan School of Music to study classical trumpet for four years.  For a brief period he lived in California to record.  He also started his own label, Chisa Records.  Masekela returned to New York City in 1966 and recorded his first hit, “Grazing in the Grass,” in 1968.  “Grazing” was nominated for a Grammy Award that same year.  Although he was successful in the United States, Masekela felt that playing “American” jazz removed him from his African musical roots.  In the late 1970s, he moved to London to record Home is Where the Music Is (1978) with Makhaya Ntshoko, Larry Willis, Eddie Gomez, and fellow South African emigrant Dudu Pukwana.

In 1980, Masekela returned to Africa, settling first in Zimbabwe for two years before moving to Botswana in 1982.  He played with his wife, Miriam Makeba, at the “Going Home” concert in Botswana, which was attended by 35,000 people.  Masekela joined Paul Simon’s worldwide Graceland tour in 1987 which celebrated South African music.  He finally returned to South Africa in the early 1990s to encourage young South Africans to revive their musical roots.  In 1995, he was selected to serve as the co-director of the State Theatre in Pretoria and a year later performed for the Queen of England at a gala in Johannesburg.  His autobiography Still Grazing (2004), named after his first hit in the United States, gives a detailed account of his confrontations with apartheid as well as his personal struggles against alcoholism.  Living in South Africa, Hugh Masekela continued to express his love for his homeland through music.

Hugh Masekela passed away in Johannesburg on January 23, 2018, due to complications from prostate cancer. He was 78 years old. He is survived by his daughter Pula Twala, son Selema (“Sal”) Masekela, and two sisters, Elaine and Barbara Masekela.