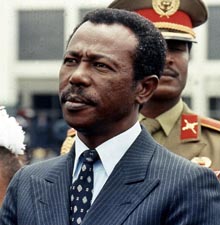 Mengistu Haile Mariam, a former Lieutenant Colonel in the Ethiopian Army, led a coup which ousted Emperor Haile Selassie from power in 1974.  Mengistu took control of the government and served as its Communist head of state in Ethiopia from 1977 to 1991. He formally assumed power as chair of the Worker’s Party, head of state and Derg (military junta) chairman in 1977.  In fact Mengistu had wielded behind-the-scenes power since the coup of 1974. Under Mengistu, Ethiopia received aid from the Soviet Union, other members of the Warsaw Pact, and Cuba.

Opposition against Mengistu’s regime emerged with a rebellion against the new government between 1977 and 1978.  The government suppressed the rebellion and in the process generated thousands of casualties, estimated at 100,000 killed or disappeared. In response the anti-Mengistu Ethiopian People’s Revolutionary Party (EPRP) launched a guerilla struggle that would last until the overthrow of Mengistu’s regime in 1991.

On September 10, 1987, Mengistu became a civilian president under a new constitution, and the country was renamed the People’s Democratic Republic of Ethiopia. Mengistu’s government was faced with enormous difficulties throughout the 1980s in the form of droughts, widespread famine (notably the Ethiopian famine of 1984-1985), and insurrections, particularly in the northern regions of Tigre and Eritrea. In 1989, the Tigrean People’s Liberation Front merged with other ethnically based opposition movements to form the Ethiopian People’s Revolutionary Democratic Front (EPRDF). In May 1991, EPRDF forces advanced on Addis Ababa.  The EPRDF forces successful toppling of the Mengistu government coincided with the fall of Communism in the Soviet Union.  The new Russian government ended aid to Ethiopia.

Mengistu fled the country with 50 family and Derg members and was soon granted asylum in Zimbabwe as an official “guest” of Robert Mugabe, the president of that country. Mengistu left behind almost the entire membership of the original Derg and the Workers Party of Ethiopia (WPE) leadership, which was promptly arrested and put on trial upon the assumption of power by the EPRDF. Ethopia has usuccessfully attempted to extradite him to face trial. Several former members of the Derg have been sentenced to death in absentia by the new regime. The trial against Mengistu started in 1994, and in January 2007 he was sentenced to life imprisonment for genocide. On May 26, 2008, Mengistu was sentenced to death in absentia by the Ethiopian High Court, overturning his sentence of life imprisonment. He remains in exile in Zimbabwe.