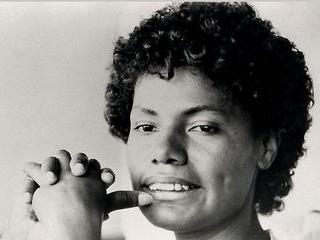 María Elena Moyano Delgado was an Afro-Peruvian community organizer and mother whose assassination by the Sendero Luminoso (Shining Path) sparked a public outcry bringing attention to her work and the plight of economically marginalized women.

Born on November 23, 1958 in Barranco District, Lima to Eugenia Delgado Cabrera, laundress, and Hermógenes Moyano Lescano, Moyano Delgado and her six siblings were mostly raised by Eugenia.  Moyano Delgado completed two-years of Sociology at Inca Garcilaso de la Vega University in Lima, but limited funds prevented further studies.  While her education provided some analytical concepts and Marxist interpretations, it was her experiences amongst community women that shaped Moyano Delgado’s approach to organizing and politics.

As a teenager, she became involved in church groups before expanding her reach into secular community organizing.  Moyano Delgado was active in the Movimiento de Jóvenes Pobladores (the Shantytown Movement), elected in 1986 and 1988 president of the Federación Popular de Mujeres de Villa El Salvador (Federation of Common Women of Villa El Salvador), and finally elected deputy mayor of Villa El Salvador in 1989, serving until her 1992 death.  She spearheaded the organization of public kitchens, health committees, various income-generating projects, education, and the Vaso de Leche program (Glass of Milk), which provided daily milk to impoverished children.

Moyano Delgado never publicly called herself a feminist, nor did she emphasize her Blackness, although her actions suggested a commitment to both.  This was due in large part to Peru’s war-torn conditions and like so many other Afro-Peruvian women, Moyano Delgado found herself and her people caught in the middle between two hyper-masculine and violent factions.  The Sendero Luminoso, a Marxist-inspired movement, and the Peruvian state under President Alberto Kenya Fujimori Inomoto, then implementing draconian neo-liberal economic reforms.

Moyano Delgado’s concern remained with Villa El Salvador women, not ideology. She considered soup kitchens a form of public grievance and saw the political in the personal. And, Moyano Delgado was committed, despite attempts to derail her daily work with women, to improving the material conditions on the ground.

Her advocacy gained the support Lima’s mayor who instituted and expanded Vaso de Leche.  Unfortunately, fundamentalist Sendero Luminoso resented attempts to improve the conditions of the poor without a full-scale embrace of the Marxist Revolution, thus they assassinated Moyano Delgado in front of her family, then dragged her body to the nearest town and blew it up with dynamite to serve as a community spectacle of terror.  Moyano Delgado knew her death was imminent since it came during the politically-motivated assassinations of María Antenati Hilario, Margarita Astride de la Cruz, Juana López, Marina Oroña Barbarán, Verónica Pérez de Mantari, and Rebeca Fernández Cartagena.

María Elena Moyano Delgado died at thirty-three years-old in Villa El Salvador on February 15, 1992.  Nearly 300,000 people attended her funeral and in 2017 her mother Eugenia accepted the Peruvian Order of Merit for Distinguished Service on Maria’s behalf.  In 1980, Moyano Delgado married Gustavo Pineki and they had two sons, David and Gustavo.