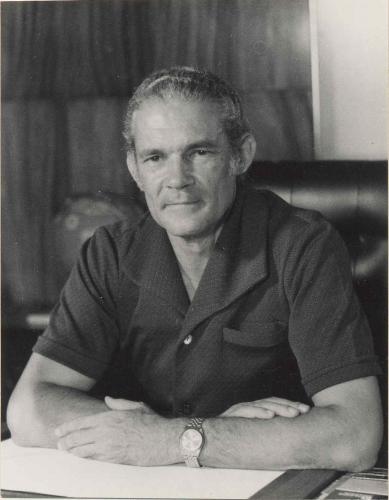 Michael Norman Manley, longtime prime minister of Jamaica, was born December 10, 1924 in the suburbs of Kingston, Jamaica to a well-off family. His father, Norman Manley, was a lawyer and political activist in Jamaica and considered by many to be a national hero. Michael Manley became interested in politics as his father was helping to found the People’s National Party (PNP) in 1938. His education at Jamaica College was followed by enrollment in McGill University in Montreal, Quebec, Canada in 1943 where he also joined the Royal Air Force. At the end of World War II, Manley left the RAF as a pilot officer and obtained a bachelor’s degree at London (UK) School of Economics, studying politics and economics with a special focus on Caribbean politics.

Manley spent a year in London as a journalist for BBC before returning to Jamaica in 1946 to write for a socialist newspaper and help his father with the PNP. He was selected for the PNP’s National Executive Council in September 1952 just as the party was re-establishing its founding democratic socialist beliefs and purging Marxist members. When the National Workers Union (NWU) was created by the PNP as a more moderate trade union than the previous Marxist-oriented Trade Union Congress, Manley in 1955 became first vice president of the new union.  Over the next decade  he led many successful efforts for better treatment and wages for workers in Jamaica, including one of the longest strikes in Jamaican history in 1964.  His union also campaigned for Jamaican independence from the British which was finally achieved in 1962.

In 1967 Manley won a seat in the Jamaican parliament, and became the opposition leader when his father passed away. After a fierce campaign, Manley was elected prime minister February 29, 1972. Following his election, Manley began a vast reform of Jamaica’s economic and social welfare systems, promoting fairer pay, gender equality, free education, and encouraging self reliance.

Manley’s government began to arouse the suspicion of the United States, Great Britain, and other major powers when Manley began to befriend Cuban political leader Fidel Castro.  He particularly angered the U.S. in 1975 when his government publicly supported Cuba’s presence in Angola.  Jamaica immediately lost U.S. aid and its economy began to decline.  In response Manley declared a state of emergency in 1976.  The economic and political crisis cost the Manley regime crucial support and he was defeated in the 1980 election by Jamaican opposition leader Edward Seaga, a political conservative.  Over the decade of the 1980s Manley slowly regained support as Seaga’s policies proved no more effective in improving the economy.  Manley won the election of 1989.  His second administration, however, abandoned many of his earlier democratic socialist policies.

Michael Manley, a member of Alpha Phi Alpha Fraternity, retired from politics in 1992 due to poor health, and died March 6, 1997 in Kingston, Jamaica of prostate cancer. He 73 at the time of his death and was survived by his five children, David, Natasha, Sarah, Rachel, and Joseph.