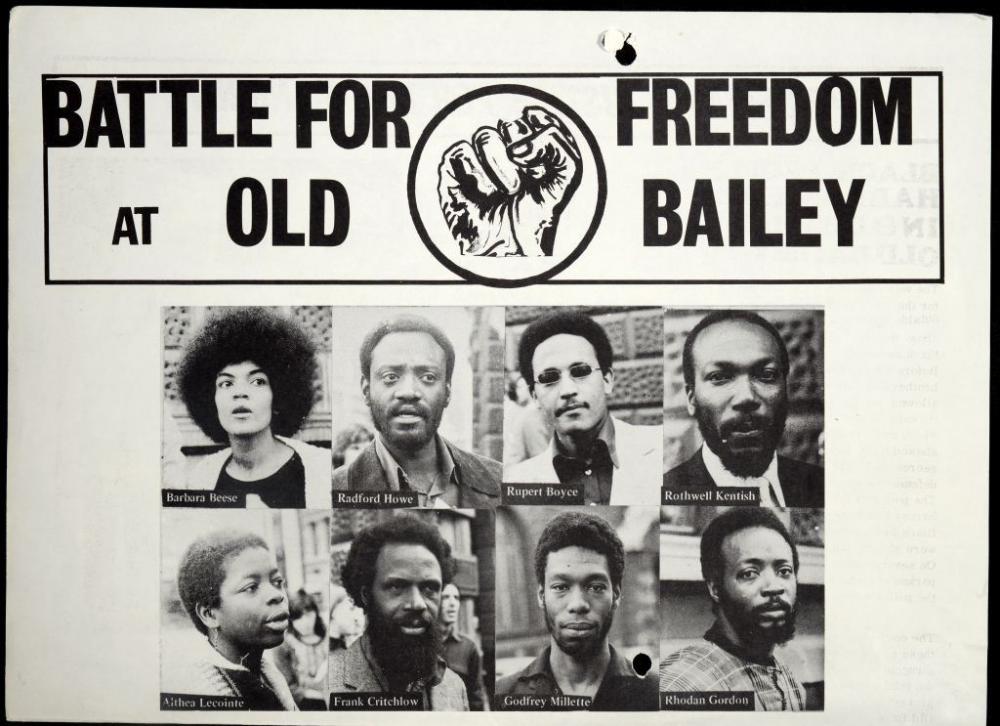 Flyer calling for justice for the Mangrove Nine, August 1970
Fair use image

The Mangrove Nine Trial was Britain’s most influential Black Power trial.  In Britain, descendants from the Caribbean, Africa, or South Asia, who were mainly immigrants from former British colonies, were considered to be “black.”  The London police and the British Home Office, responsible for immigration, security, and law and order, orchestrated the arrest and trial of nine black leaders in 1970 to discredit London’s growing Black Power movement.

The Mangrove trial focused on the police harassment of the Mangrove restaurant in west London’s Notting Hill area, which was owned by Frank Crichlow, a Trinidad-born community activist.  The restaurant was the heart of the Caribbean community and was also popular with white and black celebrities. Because Crichlow was a Black Power activist, police raided his restaurant twelve times between January 1969 and July 1970, calling the Mangrove a den of drugs, despite not finding any evidence.

In response to this intense police harassment, Crichlow filed a complaint to the Race Relations Board, accusing the police of racial discrimination.  His employee, Darcus Howe, a Trinidad-born Black Power activist, encouraged Critchlow to work with the British Black Panthers (BBP) in London to organize a demonstration against police harassment of the Mangrove.

Initially the court dismissed the charges because the statements of twelve officers were ruled to be inadmissible because they equated black radicalism with criminal intent.  However, the Director of Public Prosecutions reinstated the charges and the defendants were rearrested.

Howe and McDonald argued for the right to an all-black jury under the Magna Carta’s “jury of peers” clause.  McDonald cited case law allowing Welsh miners to have an all-Welsh jury that led to the practice of selecting juries from the defendant’s neighborhood.  The conservative judge rejected these arguments.  During jury selection, the defense dismissed sixty-three potential jurors, ensuring that there were only two blacks on the twelve-person jury.

During the fifty-five-day trial Jones-Lecointe described police persecution of Notting Hill’s black community.  Howe exposed inconsistencies in police testimony, and a police officer had to leave the courtroom when he was seen signaling to prosecution witnesses as they testified.  Meanwhile, outside the courtroom, the BBP organized pickets and distributed flyers to win popular support. Ultimately the jury acquitted all nine on the charge of rioting.

When Judge Edward Clarke stated that there was evidence of racial hatred on both sides, this was the first time a British court judge acknowledged racial discrimination and wrongdoing by the London police.  The Mangrove Nine gathered broad public support for the fight against police racism in Britain and showed that the fight for racial justice could be won.