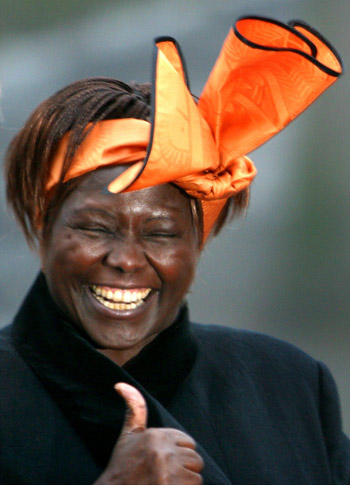 Wangari Maathai, the most prominent environmental activist in Africa, was the 2004 recipient of the Alfred Nobel Peace Prize.  Wangari Muta was born on April 1, 1940, in Ihithe, Nyeri Province, Kenya during British colonial rule.  Her family was of Kikuyu origin, and her father was polygamous. As a child Muta, was permitted a small plot of land to grown her own food and to learn how to cultivate the land. Muta attended primary school at St. Cecilia’s Intermediate Primary School near her home in Nyeri. While there, she converted to Catholicism.

In 1956, Muta entered Loreto Girl’s High School outside of Nairobi and then began college in 1960 at Mount St. Scholastica College (now Benedictine College) in Atchison, Kansas, where she received her bachelor’s degree in biology four years later.  After graduation, she earned a master’s degree in biological sciences at the University of Pittsburgh, Pennsylvania.  In April 1966, after returning to Kenya, Wangari Muta met her future husband, Mwangi Mathai, a politician.  The two married in May 1969.

In 1977, Maathai and her husband divorced; soon after Wangari was imprisoned for the first time because of her critical comments about the divorce judge’s ruling.  The judge then ordered her to stop using her former husband’s last name.  In defiance of the judge, she changed the spelling, adding an “a” and becoming Wangari Maathai.

The same year she founded the Green Belt Movement, a grassroots environmental non-governmental organization which over the next three decades planted over 30 million trees across Kenya.  She became known as the Tree Mother of Africa.

Maathai was imprisoned several times in the 1980s for criticizing Kenyan President Daniel arap Moi and for demanding multi-party elections in Kenya.  In 1989, she angered the president when she led the effort to save Nairobi’s Uhuru Park by stopping the construction of a sixty-story office tower by Moi’s business associate.

In 1992, Maathai ran for president of Kenya on a platform urging environmental protections. She was the first African politician to publicly embrace that cause.  She withdrew from the race but ran again in 1997.  In 2002, Maathai was elected to the Kenyan parliament on the National Rainbow Coalition ticket.  In 2003, she founded the Mazingira Green Party of Kenya and later that year was appointed Assistant Minister for Environmental and Natural Resources by Kenyan President Mwai Kibaki.  In 2004, Maathai won the Nobel Prize for her work.

Maathai was defeated in her 2007 reelection bid for parliament but continued to be an environmental and political activist.  In 2006, she was one of the founders of the Nobel Women’s Initiative, an organization of six women recipients of the Nobel Prize, representing North and South America, Europe, the Middle East, and Africa, who united in their efforts to work for peace, justice, and equality throughout the world.  In January 2007, Maathai hosted the Global Young Greens conference in Nairobi, which some have described as a meeting of the next wave of leadership of the world environmental movement.  Maathai wrote four books, including The Greenbelt Movement: Sharing the Approach and the Experience.

On September 25, 2011, Wangari Maathai died of complications from ovarian cancer treatment at a Nairobi hospital.  She was 71.