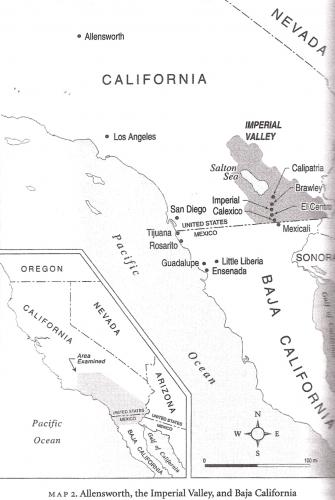 Initiated in the early 20th century by Los Angeles attorney Hugh Macbeth and the Lower California Mexican Land and Development Company, the Baja California settlement known as “Little Liberia” was envisioned as a racially-exclusive community through which African Americans would have the opportunity for vocational, economic, and agricultural advancement.  Located northeast of the town of Ensenada, “Little Liberia” was based on the notions of economic uplift, racial self-sufficiency and land accruement espoused by Booker T. Washington and Marcus Garvey.  It failed to flourish primarily due to financial mismanagement and Mexico’s land repatriation and immigration policies.

Spurred by the initiatives of the African American community group Los Angeles Forum, and the desire for land investment among entrepeurnurial African Americans, Macbeth set about establishing the all-black agricultural community in 1915, hoping to initially settle at least 200 families.  Following the lead of previous land development schemes initiated among black Americans in the late 19th century, Macbeth found Mexico to be a favorable site because of its historical status as a refuge for runaway slaves and its seemingly non-discriminatory environment. Because of its location in Mexico, “Little Liberia,” as California newspapers indicated, would be a site not only of economic prosperity but one of tolerance and freedom, where blacks would be regarded as equal to all others.

Promotion for the Baja California colony was established on two fronts:  at home from Macbeth and his newly established corporation the Lower California Mexican Land and Development Company, and from Mexican authorities. While Mexican government officials such as Minister of the Interior Manuel Aguirre Berlanga welcomed colonization, investment, and development by foreign nationals, Macbeth’s company offered minimum tracts of five acres at $20 per acre to men and women under the notion that they would be creating a paradigm of self-determination and self-sufficiency. Further, promoters suggested that along with agricultural opportunities, colonizers might have access to mineral concessions from nearby mines.  Macbeth envisioned these enticements as facilitating the population growth of the colony by at least 20,000 by the end of the decade.

Toward late 1919, African Americans began to occupy “Little Liberia,” readying land for citrus orchards and various fruit groves and raising livestock. They would subsequently engage in agricultural competition with established Russian communities.  By 1921, California papers indicated that the colony had encompassed over 20,000 acres, and by the next year it had attracted an increasing number of affluent tourists, adding to the popularity of African American land investment in Mexico.

However, by 1923, Mexican authorities began to curtail entry and investment by black Americans citing fears of ethnic and racial tension, and it began to reclaim all American-held land after 1928.  The colony was further undermined by mismanagement exposed by audits of company books.  Stockholders lost their investments when it was discovered that the Company had accrued debts totaling $70,000 over their assets.  By 1927, the Lower California Mexican Land and Development Company declared bankruptcy and the lands were seized by the Mexican government the following year.